Iran has denounced airstrikes by the Saudi-led coalition in Yemen, saying military intervention is an act of genocide. The remarks are the latest in a heated argument between Shiite Iran and Sunni Saudi Arabia. 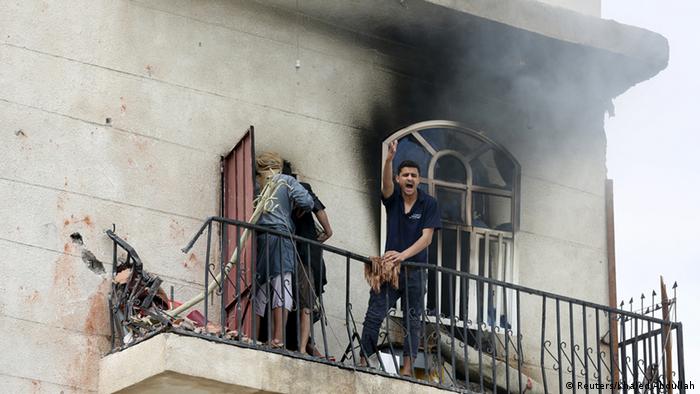 "This is a crime and genocide that can be prosecuted in international courts…Riyadh will not emerge victorious in its aggression," Khamenei said in a statement on his official website, addressing the Saudi government.

"Certainly, the Saudis will suffer damage," he warned, without going into detail.

The coalition, led by Riyadh, includes nine Arab countries and has US backing. It launched an airstrike on March 26 to counter advances by Houthi rebels who have ties to Iran and forces loyal to Yemen's former president, Ali Abdullah Saleh.

Houthi fighters have control of the capital Sanaa and have been trying to take the southern city of Aden from local militia forces.

Tehran has repeatedly called for airstrikes to cease and talks to occur between opposing factions.

The UN head told reporters he implored all countries in the region to do everything they could to help the people of Yemen, saying "the last thing the region and our world need is more of the chaos and crime we have seen in Libya and Syria."

Ban urged all parties in the conflict to permit the delivery of badly needed aid supplies to the region.

Meanwhile, the against meddling in the conflict in Yemen.

US Secretary of State John Kerry told the American public broadcaster PBS on Wednesday that Washington would stand by its allies in the Middle East, who in light of the current conflict in Yemen felt threatened by Iran.

"We're not looking for confrontation, obviously, but we're not going to step away from our alliances and our friendships and the need to stand with those who feel threatened as a consequence of the choices that Iran might be making," Kerry said.

Meanwhile on Thursday, the AFP news agency reported that Saudi-led coalition aerial campaign had struck Yemen's defense ministry in Sanaa, which is controlled by allied troops and Shiite rebels.

Witnesses reportedly said that they had heard warplanes hit the building in the center of the capital and thick smoke could be seen around the area.

Witnesses also reportedly said the strikes were part of raids that hit targets across Sanaa, including a base for the elite Republican Guards in Fajj Attan.

Republican Guard members have remained loyal to former President Saleh, who renounced his leadership in 2012 after nation-wide demonstrations called for his resignation. Saleh ruled the country for three decades and is allied with the Houthi rebels who are fighting against government forces.

The World Health Organization reported that more than 640 people have died since fighting began on March 19. The UN children's agency reported Thursday that around 30 percent of fighter's in Yemen's armed groups were minors.

"We are seeing children in battle, at checkpoints, and unfortunately among (those) killed and injured," Julien Harneis, UNICEF's Yemen representative told AFP during a visit to Geneva on Thursday.

Opinion: The new agreement between Turkey and Iran

Turkish President Erdogan’s visit to Tehran is part of a meandering Turkish policy between Arabs and Iranians. Turkey has not presented a compelling vision of regional policy, writes DW’s Thomas Seibert. (09.04.2015)

Aid workers have warned of a humanitarian crisis unfolding in Yemen as the civil war continues. The US has meanwhile stepped up weapons deliveries for the Saudi-led offensive against Yemen's Houthi militias. (08.04.2015)