Satellite pics show Rohingya homes torched in Myanmar | Asia| An in-depth look at news from across the continent | DW | 13.11.2016

Hundreds of buildings in Rohingya villages have been torched, satellite images released this week show. This comes as deadly fighting has flared in the strife-torn region of western Myanmar. 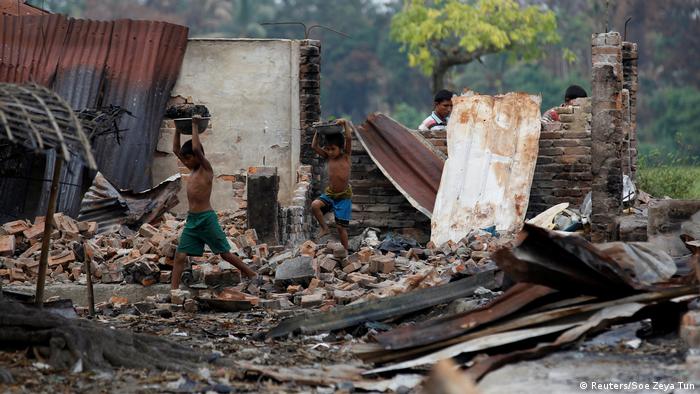 At least eight people have died and 36 have been arrested in clashes between the army and what the Myanmar government alleges are Rohingya Muslim militants in western Rakhine State, state media reported Sunday. This is the largest escalation of the month-old conflict yet.

It comes as new satellite images released by Human Rights Watch show what the group said was evidence of around 400 homes destroyed by arson near the border with Bangladesh.

Human Rights Watch's Asia Director Brad Adams says the new photos showed "widespread destruction" that was worse than previously believed. "Burmese [Myanmar] authorities should promptly establish a UN-assisted investigation as a first step toward ensuring justice and security for the victims," Adams said in a statement.

Myanmar's 1.1 million Rohingya Muslims are the majority in Rakhine, but they are denied citizenship and other basic rights, with many majority Buddhists regarding them as illegal migrants from Bangladesh. They also face severe travel restrictions. Myanmar soldiers have killed several dozen people and arrested scores in their hunt for the attackers, who the government claims are radicalized Islamist militants with links to overseas militants.

The crisis and reports of grave rights abuses being carried out in tandem with the security crackdown have put international pressure on Myanmar's new civilian government and raised questions about its ability to control its own military. The deadly violence in Rakhine has deepened and complicated a crisis that already posed a critical challenge to the new administration led by former pro-democracy activist Aung San Suu Kyi.

Myanmar has simmered with religious tension ever since waves of violence between the majority Buddhist population and the Muslim Rohingya left more than 200 dead in 2012. The then junta-led government pushed more than 100,000 people, mostly Rohingya, into displacement camps where they have since languished.

International rights groups - which applauded Suu Kyi's ascension to power in recent elections - complain that the minority still faces apartheid-like restrictions on movement and have repeatedly called on her to work toward a solution. But Buddhist nationalists at home oppose granting citizenship to Muslims, despite their long roots in the Southeast Asian country.