The European Union and Russia formally got their relations back on track Wednesday when French President Nicolas Sarkozy and his Russian counterpart, Dmitry Medvedev, met for talks on a common future.

At an international conference in the south-eastern French resort of Evian, Sarkozy called for a total reconstruction of the European security structure.

Sarkozy also proposed a summit meeting of the Organization for Security and Cooperation in Europe to be held at the end of 2009 "to discuss (Russian) proposals and those of the European Union for new concepts of a pan-European defence."

For his part, Medvedev urged the convening of a "special forum" at which "the leaders of all European states and the leaders of key organisations in the Euro-Atlantic area could take part."

The object of the forum would be to discuss the new European Security Treaty, which Medvedev first suggested to German Chancellor Angela Merkel in June, and which he elaborated on in Evian.

"The Euro-Atlantic area needs a positive agenda today," Medvedev said. "The events in the Caucasus have merely confirmed the absolute correctness of the idea of a new European Security Treaty." 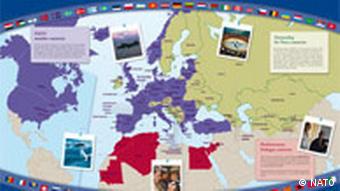 The Russian president said his proposed treaty consisted of five parts, including "a clear affirmation of the inadmissibility of the use of force -- or the threat of force -- in international relations."

Another clause would assert that "no single state or international organization may have the exclusive right to maintain peace and stability in the region. This applies fully to Russia too."

Sarkozy was receptive to the idea, saying, "We are ready to talk about it with the Russians because security in Europe and beyond is a common good."

Medvedev also used the occasion to protest against the expansion of NATO to near Russia's borders.

"The Alliance is moving its military infrastructure right up to our country's borders, and drawing new 'dividing lines' in Europe, right along our Western and Southern borders," he said. "Quite naturally, no matter what is being said, we regard these actions as directed against us."

However, he said that Moscow's intentions were peaceful.

"We are absolutely not interested in confrontation. Russia's successful development is possible only in conditions of transparent and equal international relations. And this is the guarantee of the stability of the world," Medvedev said. 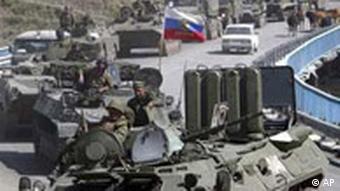 Medvedev also used the conference to officially declare the withdrawal of Russian troops from two “buffer zones” inside Georgia Proper, two days before a deadline set by an EU-brokered peace deal. The completed pull-out was later confirmed by Georgian and EU officials on the ground.

Sarkozy acknowledged the Russian pullout as “a highly important development,” saying that Medvedev had “kept his word” and that the move reopened the floor for discussions between Russia and the EU.

"The full implementation of the (Georgia peace) accords... paves the way for the resumption of negotiations on an ambitious framework agreement" that would "lead the way towards a real human and economic common space," Sarkozy said.

"Europe wants a strong Russia," he added, arguing that the world's current financial turmoil rendered it "essential" for the bloc to have strong ties with Russia.

The relationship -- frozen by the 27-nation EU last month in protest over the Georgia conflict -- is up for review at an EU-Russia summit in November in the southern French city of Nice.

The European Union's response to the Caucusus crisis hasn't been exactly forceful. But DW's Christoph Hasselbach says it's all that anyone can expect given Russia's global strategic importance. (16.09.2008)