Germany's World Cup qualifier against San Marino on Saturday will be their last game before they fly to Russia for the Confederations Cup. They're heavy favorites, but Joachim Löw doesn't expect to break any records. 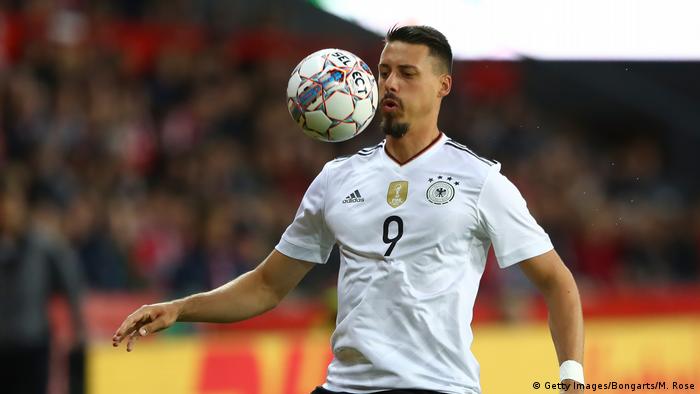 Sandro Wagner will start in attack for Germany when they face San Marino in Nuremburg on Saturday, coach Joachim Löw has confirmed.

Wagner, who scored 11 Bundesliga goals for Hoffenheim last season received his first cap for Germany on Tuesday, will hope to score his first international goal against the European minnows.

Löw also announced that Julian Draxler will once again captain the side.

Draxler, 23, is nursing a minor knee injury, but played all 90 minutes in Germany's 1-1 draw with Denmark in Brondby on Tuesday. It would be the third time in his career he has worn the captain's armband for Germany.

'Not realistic to go on a record hunt'

Germany have won each of their first five World Cup qualifiers, comfortably sitting atop their group on 15 points. San Marino are at the other end of the Group C of European qualification. They have yet to win a game and have scored one goal in qualifying.

"We have the chance to deliver an attractive game for our fans," said midfielder Sebastian Rudy in a press conference on Friday. "We want to let the ball do the work." 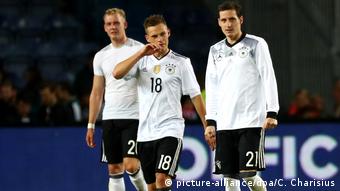 Julian Brandt, Joshua Kimmich and Sebastian Rudy (from left to right) after Germany's 1-1 draw with Denmark

But Germany will also be looking forward to the Confederations Cup in Russia, which begins on June 17. Löw gave six players their first caps against Denmark, and may feature another new face over the weekend.

"With all due respect to San Marino, tomorrow it is all about how we will approach the game and not how San Marino will play," Löw said.

"It is not really realistic with this new team to go on a new record hunt," he added. "Clearly we want to win, we want to show fans enjoyable fun football and also score a lot of goals."

Tuesday night's friendly in Brondby was an experiment for Joachim Löw’s Germany team. But 25 years on from Denmark's most famous victory, the contest was a reminder of Danish glory and pride. (07.06.2017)