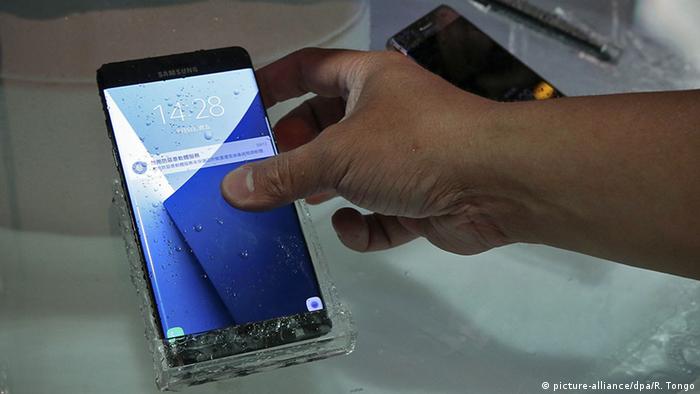 Korea's Yonhap news agency reported on Monday that the decision to suspend production of the Galaxy Note 7  was taken in cooperation with consumer safety regulators from South Korea, the US and China.

"This measure includes a Samsung plant in Vietnam that is responsible for global shipments [of the Galaxy Note 7]," a Samsung supplier told Yonhap on the condition of anonymity.

Citing "a person familiar with the matter," US paper "The Wall Street Journal" also said that production of the phone had been halted. Samsung is yet to confirm the decision to suspend production.

Samsung, the world's largest smartphone maker, started selling the Galaxy Note 7 on August 19. Less than a month later, however, a global recall of some 2.5 million units was announced, following reports that some of the devices had caught fire.

The recall appeared initially to be on track until last week when reports emerged of similar problems occuring with some of the replacement phones.

US media reported on Wednesday that a Southwest Airlines flight was evacuated after an overheated Galaxy Note 7 started emitting smoke. Around 75 people, passengers and crew members, were forced to leave the Baltimore-bound plane in Louisville, Kentucky. Accoring to local media, the phone had been replaced two weeks earlier as part of the recall process.

The announcement saw Samsung's share price plunge by as much as four percent in early morning trade on Monday - even before the Yonhap news report came out. By midday, Samsung shares were trading at 1.65 million won - down 3.2 percent from Friday's close.

AT&T said they would continue to offer customers the option to exchange Galaxy Note 7s for another Samsung smartphone or other device of their choice.

T-Mobile, however, said it was halting sales of the smartphone, as well as the exchanges.

US regulator calls for recall of Samsung Galaxy Note 7 smartphone

A US regulator has demanded Samsung recall its Galaxy Note 7 smartphones after the company told users to turn off phones over a threat of battery fire. The South Korean manufacturer has recalled the phone in 10 markets. (10.09.2016)

After the South Korean tech giant urged customers over the weekend not to use its flagship yet fire-prone smartphone, investors massively sold Samsung shares, wiping off billions of dollars in value. (12.09.2016)

Samsung has urged South Korean users of its flagship smartphone to accept a software update limiting recharging of the Galaxy Note 7 batteries - a measure designed to lower the risk of the gadget exploding. (14.09.2016)