Russia has begun the one-year countdown until the Black Sea city of Sochi hosts the Winter Olympic Games. President Vladimir Putin attended the event after firing a senior official in the organizing committee. 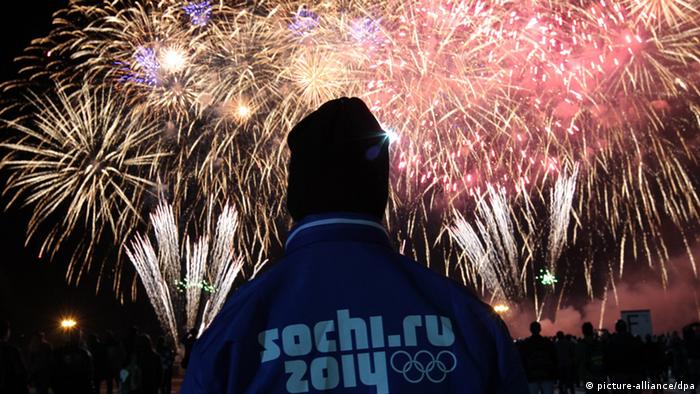 Cities across Russia began the festivities by unveiling special clocks in their main squares which are to countdown the days, hours and minutes until the Sochi Winter Games open in one year's time.

The capital, Moscow, unveiled a clock measuring six meters (19.69-feet) in height near Red Square. The mayor, Sergei Sobyanin was joined by Olympic champions Svetlana Zhurova and Ivan Ukhov for the unveiling ceremony.

President Putin was in Sochi to take part in the celebrations in the Black Sea resort on Thursday.

"We have reached a point where the Olympic dreams and hopes begin," Putin told the ceremony at the Sochi's ice dome.

"The works in Sochi have had no precedent in the history of Russia or the Olympic movement," the president said. "We all know how important it is to believe and move towards one's dream."

The head of the International Olympic Committee, Jacques Rogge, expressed confidence that construction on all of the facilities would be completed in time for the start of the Games, in exactly one year's time.

"I have no doubt that Sochi will be ready," Rogge said, before thanking the Russian president for his "unwavering commitment."

Despite Rogge's apparent confidence in the Russian organizers, not all was well 365 days before the Olympic flame was set to be ignited.

'Boycott Sochi Olympics in the name of Syria'

While a military intervention in Syria is highly unlikely, Moscow’s support for Assad must be stopped. An international boycott of the Sochi Olympics would make Russia pay a price, writes Kyle Matthews. (21.06.2012)

The German men's ice hockey team has failed to qualify for the Winter Olympics for the first time in decades, losing out to neighboring Austria. But Germany will still be able to root for their women's team in Sochi. (10.02.2013)

Following a visit to the Russkie Gorky ski-jumping complex on Wednesday, President Putin expressed his anger over major construction delays and cost overruns. He subsequently ordered the deputy head of Russia's Olympic Committee be fired.

"The decision about the sacking has been taken," Deputy Prime Minister Dmitry Kozak told the Interfax news agency. "People who do not carry out their obligations to such an extent cannot lead the Olympic movement of our country."