Russian 'spy whale' may have provided therapy for children

The tame beluga whale that appeared in Norwegian waters may have previously served as a child therapy animal in Russia, according to Fiskeribladet. There had been media speculation that the whale was a Russian navy spy. 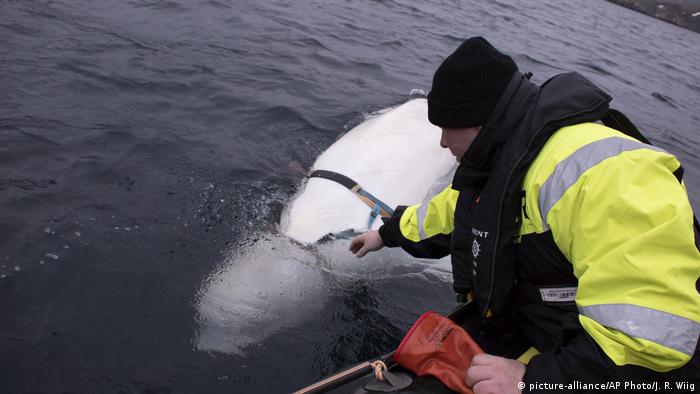 The fishermen spotted the four-meter (13-foot) Beluga whale in Arctic waters. They reported the animal was rubbing itself against the boats in an apparent attempt to remove the harness strapped around its body. Eventually, one fisherman jumped into the water and took the item off the placid whale. Inspecting the harness, the Norwegians discovered it had a mounting point for a camera and was marked "Equipment St. Petersburg" in English.

The Norwegian military subsequently showed interest in the find, with experts speculating the animal had been trained by the Russian navy for naval reconnaissance. The whale itself eventually reached the Norwegian harbor of Hammerfest, and is still in the area. It is very comfortable around people and even allows itself to be petted. 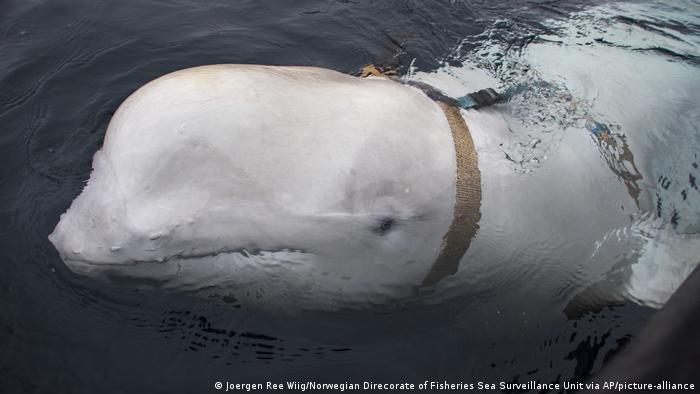 The whale followed fishing boats to a Norwegian harbor

According to Fiskeribladet, however, the animal's tameness is not the result of military training, but rather of working with children. One of its former journalists says the mammal shows a strong resemblance to Semyon, a therapy whale kept by a dive center in northern Russia.

"I recognized him from a story we had made," former Fiskeribladet reporter Morten Vikeby told the paper, while also pointing to a video featuring Semyon playing with children.

"It was wearing a harness because it was used to dragging boats with children on board," the reporter added. "This is the reason why he is so social."

However, the journalist emphasized he could not guarantee it was the same animal.

Read more: Captured Russian whales and orcas to be freed from 'whale jail'

'Just a whale who wants to be kind'

A 2008 video made by a local TV station in Russia shows Semyon doing tricks and playing with children. According to the video, the whale had been attacked by sea lions several years prior, while he was still a calf. He was then saved by humans and left with the diving center staff on the outskirts of the Murmansk region. The staff used Semyon as a therapy animal to help schoolchildren, some of them with special needs, to reconnect with nature.

An inspector with Norway's Directorate of Fisheries, Jorgen Ree Wiig, said the latest news about the whale was "amazing."

"We have been thinking of espionage and war, but it is just a whale who wants to be kind to people," Wiig told Fiskeribladet. "It is even used to cuddling with us."

The Directorate of Fisheries says that, to the best of their knowledge, the dive center did not report a missing a whale.

Previously, Norwegian media said officials were considering moving the animal to a whale reserve in Iceland alongside two female whales from China.

Beluga whales can live to be around 50 years old.