Russian election overshadowed by accusations of fraud, manipulation | Europe | News and current affairs from around the continent | DW | 05.12.2011

Russia's parliamentary election on Sunday was the "dirtiest" in years, according to independent election observers. German politicians, meanwhile, are calling on the Russian government to implement more reform. 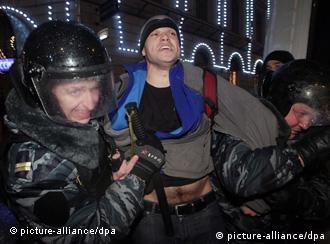 Demonstrators turned out to protest the election

International election observers said Monday that Russia's parliamentary election was deliberately slanted in favor of the ruling party, calling it the "dirtiest" election in the past decade.

According to a report released by the Organization for Security and Cooperation in Europe (OSCE) on Monday, the vote saw frequent procedural violations, and in some cases obvious manipulation. The OSCE said there was also strong evidence pointing to the existence of additional ballots in favor of Vladimir Putin's United Russia party.

In some polling locations, ballot boxes were seen already filled to one-third capacity before the vote had officially begun, and there were many reported cases of repeat voting. Election monitors in Moscow showed a video from the city of Yekaterinburg in the Urals in which the same voters were driven from one polling station to the next. Similar violations were reported throughout Russia.

Official results released Monday showed that United Russia, the governing party of President Dmitry Medvedev and Prime Minister (and 2012 presidential candidate) Vladimir Putin, maintained its status as the strongest political force within the Duma, Russia's parliament, but only just. The Kremlin party won just under 50 percent of the vote – enough to maintain 238 out of the 450 seats in parliament, but down from a previous two-thirds majority. Runners-up were the Communist Party, Just Russia and the right-wing Liberal Democratic Party of Russia.

'The playing field was tilted' 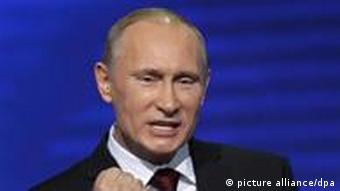 Putin will face more opposition and competition in the new Duma

Observers said the problem of vote manipulation was already evident in the run-up to Sunday's vote.

"The main problem that we observed in our assessment was this close connection between the state and the ruling party,” said Tino Koks, head of the delegation from the Council of Europe. "The state was able to influence all phases of the election."

Observers pointed out that not all opposition parties had been allowed to take part in the vote, a move that restricted the democratic process. In addition, the parties that were able to register did not receive equal access to the state media.

"The vote was like a game, in which only a few select players were allowed to take part," said Heidi Tegliavini, head of the OSCE delegation. "Furthermore, the playing field was tilted at an angle to benefit one of the players."

Medvedev said the election results reflected the true makeup of Russian politics. "United Russia received exactly the support that it deserved. No more and no less," he said. "In this respect, this was an honest, fair and democratic election."

Many Russians, however, doubt his words. Several thousand people, with some estimates placing the number between 5,000 and 10,000, protested against Putin and the United Russia party in Moscow on Monday evening, one of the largest opposition rallies in years.

Hundreds marched toward the Elections Commission near the Kremlin, shouting "Russia without Putin" and accusing his party of stealing votes. They were stopped by riot police, and some of the activists were detained.

"These elections clearly show how the 'necessary' percentages can be reached by violating all of the rules," said Lilia Shibanova, the head of the watchdog organization Golos, which monitors Russia's elections. 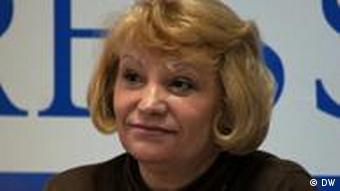 Golos complained of massive pressure by the Russian authorities ahead of the vote. On election day, the websites of Golos and other Russian media were disabled by hacker attacks.

"After the polls closed at 8 p.m., we received widespread reports that election monitors from Golos as well as from the parties were kicked out," said Shibanova.

She added that the result of the election could thereby be manipulated without any witnesses.

In Germany, politicians from the governing coalition as well as the opposition were surprised at the initial election result.

Andreas Schockenhoff, the government's commissioner on Russian affairs, told Deutsche Welle that given the election irregularities, it was astonishing that United Russia brought in less than 50 percent of the vote. The result demonstrated that Russia is becoming more pluralistic, he said.

"I hope that in the next Duma there will be a true competition of ideas," he added, saying that the question is how Russia views its own future, since modernization is "above all a domestic Russian issue." He noted that "Putin did not use the word modernization a single time in his last speech before the party convention."

"If Russia wants to modernize then it needs an active partnership with Europe," said Schockenhoff.

Early indicators show the party of Russian Prime Minister Vladimir Putin losing ground after Sunday's vote. The United Russia party got just under 50 percent. The opposition claims the election was not free and fair. (04.12.2011)

Opinion: It's the beginning of the end for Russia's 'managed democracy'

The decisive result of Russia's parliamentary elections is not the victory for Putin's United Russia but instead for the unprecedented charges of vote fraud and manipulation, says Deutsche Welle's Ingo Mannteufel. (05.12.2011)

Russian voters choose among limited political options at the polls

Voters in Russia are heading to the polls to cast their ballots in the parliamentary election. However, their options are limited, with only the Communists and parties close to the Kremlin having much chance of success. (04.12.2011)