Regions of eastern Ukraine controlled by pro-Russia rebels have gone to the polls to elect their leaders. The results, which have been recognized by Russia but rejected by the EU, were never in doubt. 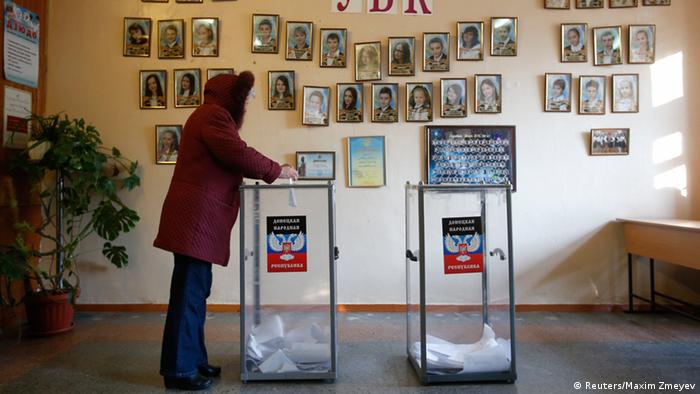 One exit poll found that Alexander Zakharchenko, 38, who commands the rebels fighting Ukrainian security forces in Donetsk, took just over 80 percent of the vote. In Luhansk, Igor Plotnitsky, 50, didn't fare quite so well, but is still reported to have taken more than 60 percent.

As predictable as the results were, so were the reactions of both Russia and the West. The Kremlin quickly endorsed the results of the elections.

"We respect the expression of the will of the residents of southeast (Ukraine)," Russia's Foreign Ministry announced in a statement quoted by local media late on Sunday.

"Those elected have received a mandate to resolve the practical issues of re-establishing normal life in the region."

The European Union has rejected the polls, with its newly appointed foreign policy coordinator saying they would only serve to complicate efforts to bring peace to the war-torn region.

"I consider today's 'presidential and parliamentary' elections in Donetsk and Luhansk 'People's Republics' a new obstacle on the path towards peace in Ukraine. The vote is illegal and illegitimate, and the European Union will not recognize it," read a statement released by the office of Federica Mogherini.

"It is clear to me that the so-called elections that were held in eastern Ukraine do not comply with the Minsk agreement, neither in letter nor spirit, and therefore, what the high representative said on behalf of the European Union yesterday applies - that we cannot recognize these elections," Steinmeier said.

The vote was also criticized by the Organization for Security and Co-operation in Europe, of which Russia is a member. It also said that the elections contravened the truce agreed in talks in Minsk in September, which, temporarily at least, led to a significant decrease in the fighting in eastern Ukraine.

An upsurge in the fighting was reported in the days leading up to Sunday's elections.

Separatists in eastern Ukraine staged a farce with Sunday's disputed elections, with citizens lacking any real choice at the ballot box. The Minsk peace talks have been rendered null and void, says DW's Bernd Johann. (03.11.2014)

Separatist-controlled regions of eastern Ukraine go to the polls

Voters are going to the polls in two regions of eastern Ukraine controlled by pro-Russia separatists. Kyiv as well as several Western countries, including Germany, have said they will not recognize the results. (02.11.2014)

On Sunday, rebel territories in eastern Ukraine choose a parliament and leader. The vote, with unknown candidates and a lack of opposition figures, has been condemned by the international community. (02.11.2014)