Russia has withdrawn the press credentials of all Deutsche Welle staff and is shutting the organization's studio in Moscow. Calling the move a "total overreaction," DW said it would take legal steps against the decision. 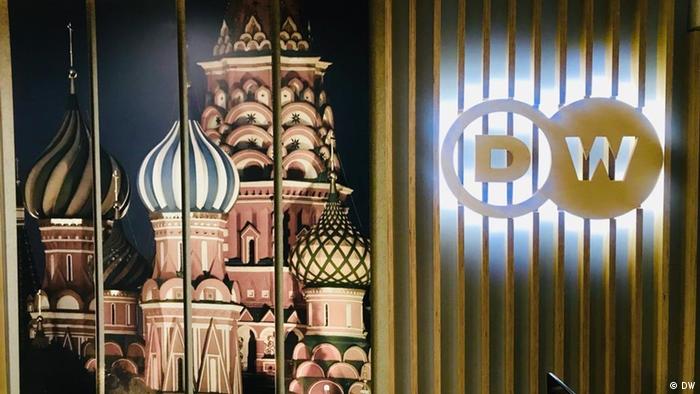 DW reporters in Russia were told that their bureau would be shuttered on Friday at 9 a.m. local time

Russia on Thursday said it was closing the Moscow bureau of German broadcaster Deutsche Welle and revoking its employees' accreditations in the country.

The Russian Foreign Ministry also said in a statement that it would "terminate the satellite and other broadcasting [output] of Deutsche Welle" on Russian territory.

Russia had earlier criticized a German regulator's ban on German-language programming by Russia's state broadcaster RT as an attack on freedom of expression and freedom of the press.

The Russian government said it was planning to initiate a procedure to label DW a foreign media outlet performing the functions of a "foreign agent," a designation that carries additional government scrutiny.

Moscow said it would also ban officials involved in restricting the broadcasting of RT in Germany from entering the Russian Federation.

Later, the state State Duma, the lower house of parliament, officially banned DW journalists from entering and from receiving accreditation for events.

The ban drew condemnation from across Germany.

'Total overreaction from the Russian government'

DW Director General Peter Limbourg said the decision would only strengthen DW’s resolve to report on events in Russia.

"This is another sign that the Russian government is not interested in press freedom and freedom of opinion," Limbourg said in an interview on DW.

"Even if we have to leave the country, we will intensify our reporting on the country," he said. "We will not just ignore what is happening in Russia, we will report. And we will do more and more."

Limbourg said the announcement would nevertheless be a blow to DW reporters in Moscow, whom he called passionate about the country and Russian culture.

He said the decision could not be seen as a tit-for-tat move, given that Russian journalists are still allowed to continue working in Germany and the differences between DW as a public service broadcaster and RT as a state broadcaster.

"We had been expecting some measures by the Russian side, but I think this is a total overreaction from the Russian government," he said, adding that DW would take legal measures to attempt to overturn the decision.

DW Moscow Bureau Chief Juri Rescheto said he was told to close the bureau by Friday morning and that DW staff had to return their press accreditation cards.

"We are shocked. For all of us here, this news is very personal," he said. "There are a lot of open questions at the moment — technical questions, legal questions."

"The measures that the Russian government announced today against Deutsche Welle have no basis whatsoever and represent a renewed strain on German-Russian relations," a spokesperson for the ministry said in a statement.

"If these measures are actually implemented, this would limit free reporting by independent journalists in Russia, which is particularly important in politically tense times," the spokesperson added.

"The broadcasting ban on Deutsche Welle in Russia and the closure of its office in Moscow are wholly unacceptable," she said. "DW is also an independent organization. This means that, unlike RT DE, the German state does not exert any influence on programming. I therefore urge the Russian side not to exploit RT's licensing problems for political purposes."

What is the status of RT in Germany?

RT — formerly Russia Today — broadcasts internationally in six languages. While it claims that its programming contributes to public debate, critics accuse RT of funneling propaganda and disinformation on behalf of the Kremlin. As well as German and Russian, Moscow-based RT has content in English, Spanish, Arabic and French.

RT has a studio in Berlin — previously the outlet had attempted to get a license in Luxembourg, but failed to do so.

The German MABB media watchdog and Commission for Licensing and Supervision of media organizations on Wednesday said that RT DE could not broadcast in Germany using a Serbian license.

Because the German language version of RT is organized by a Berlin-based production outfit, German media regulators argue the network falls under Germany's jurisdiction.

German security services have classified RT's German service to be a propaganda arm of the Russian state.

This is the third German-language YouTube channel run by RT to be blocked. The decision could further strain tensions between Germany and Russia.

Chancellor Olaf Scholz has said he will meet with Russian President Vladimir Putin in Moscow "soon." The news comes as Germany remains under fire for what many see as an indecisive stance in the Ukraine crisis.

The Russians - An intimate journey from birth to death, Part 1

The Russians - An intimate journey from birth to death, Part 2