Rubbish Crisis in Naples Worsens | Europe | News and current affairs from around the continent | DW | 18.05.2008

Despite emergency measures to resolve the rubbish crisis in the southern Italian city of Naples, the situation worsened Saturday, May 17, with more than 100 fires set to the mountains of garbage. 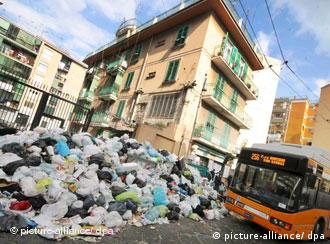 Residents are fed up with the ongoing waste problem

A television team recorded stones being thrown at one fire crew as it attempted to put out a fire in the suburb of Barra.

"They are also attacking us because of the mountains of rubbish in the streets," one fireman said. "It's not the first time they have tried to attack us, and I fear that it will also not be the last."

Rising temperatures have exacerbated the problem of the stinking mounds of trash, which contain up to 5,000 tons of material.

At the height of the crisis in January, there were 7,000 tons of rubbish on the streets of the city of 1 million and the surrounding Campania region.

Neapolitans have reported that the rubbish mountains are hundreds of meters wide in some streets. They have launched protests against the city council's plan to set up a new dump on the outskirts of the city.

Italy's new Prime Minister, Silvio Berlusconi, has said he will treat the rubbish crisis as a priority and will discuss it with his cabinet on Wednesday.

The European Commission has threatened to fine Italy millions of euros if it does not sort out the "dramatic refuse crisis."

The rubbish was left lying in the streets for the first time in the spring of last year. The crisis returned at Christmas because there were not enough dumps in which to deposit the rubbish.

The EU's executive arm said that although Italy had set up a commission to deal with the rubbish problem and that this had improved the situation somewhat, the government's measures were insufficient to completely resolve the crisis.

Italy's parliament got down to business after the recent victory for Silvio Berlusconi's center-right party. The strong showing will make it easier for Berlusconi to push through reforms. (29.04.2008)

Germany is reportedly the only EU country with sufficient capacity to help Italy out with its massive trash problem. It has inked a deal to dispose of up to 160,000 tons of Neapolitan waste -- for a tidy price. (02.04.2008)

The European Union's highest court has upheld the bloc's principle of protected food names, ruling that only "Parmigiano Reggiano" -- or those cheeses made in Italy -- can be sold as "Parmesan." (27.02.2008)