Although India harvested a bumper crop of grain this season, officals have warned that too much of it is rotting away in storage, instead of feeding the hungry poor. 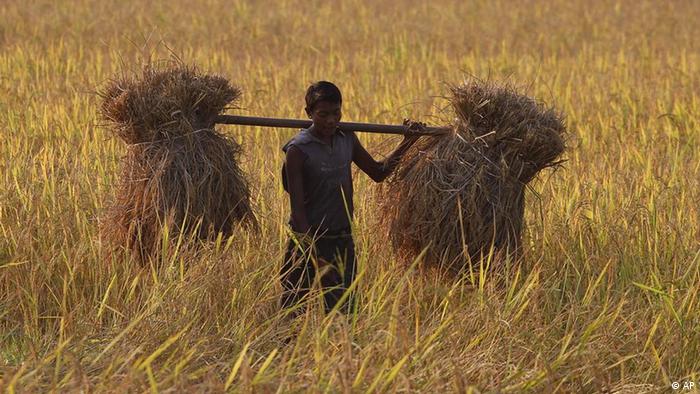 The right time to eat for a rich man is when he is hungry; for a poor man when he has something to eat. This Mexican proverb highlights the plight of hungry Indians.

The total stocks across India in the central storage pool are expected to be at an all-time record of 75 million tons in June this year - almost one hundred thousand tons more than last year, The Food Corporation of India (FCI), announcing its latest estimates to the government, simultaneously warned, however, that there was a serious problem of vital food grains rotting away in silos. 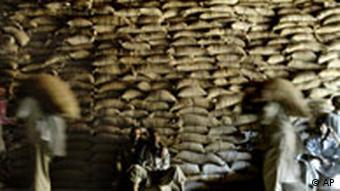 Too much rice and other grains are going to waste

According to the Global Hunger Index (GHI, 2011), released by the International Food Policy and Research Institute and which measures hunger levels as a percent of the population, ranks India way below its South Asian neighbors Pakistan, Sri Lanka and China. It stood 67th among the 81 countries surveyed.

The expected increase in stocks in India is, of course, a positive sign. However, with tons of it rotting in granaries due to insufficient and improper storage, the poor in India may be facing a shortage. What's more, the onset of the monsoon season in India is further exacerbating the storage and scarcity problem. Experts are even asking themselves whether this excess food grain is a result of a drastic increase in production or in imports?

“When you have twice the grain you are equipped to stock, you have a problem,” says P.Sainath, a development journalist in The Hindu newspaper and an author of the book ‘Everybody Loves a Good Drought.'

“The buffer stocks with the government in fact show an increasing trend, however, that per capita availability is in fact declining at a faster rate. It means that the poor are so badly hit that they cannot buy, or even have access to the limited grain on offer,” he adds.

Handing out to the public

With stocks rotting in granaries, regular and proper supplies of food grains seem to be a distant dream for the poor in India, and the answer may lie in the country's public distribution system. 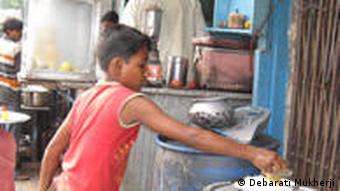 India does not want to distribute excess food to the poor, fearing it would upset the market

Earlier this year, there were newspaper reports about the FCI notifying the central government of large amounts of grain rotting in government storage faciities. It suggested distributing excess amounts to the poor of Below Poverty Line card holders through the public distribution system (PDS) across the country.

“The government of India could distribute that excess grain, or release it at low prices through the public distribution system. But it would hate either option. That would go against the grain of its ideology and economics. Letting the hungry eat it would, for the government, increase the “subsidy burden,” says Sainath.

Pranab Mukherjee, the Finance Minister of India, however, cites reasons of fiscal constraint for having rejected the food ministry's proposal to distribute more grain to Indian states. Instead, the government this year permitted the export of up to 4 million tons of non-basmati rice.

Shankar Goplakrishnan, secretary of the NGO Campaign for Survival and Dignity, says “it is a classic example of the government not being committed to food security but to financial markets. They claim they don't want to distribute, as it would destroy the market.”

“Food is an unelastic good. Even if it is distributed for free to the poor, it will not stop other people buying,” he added.

The Supreme Court of India once said, “In a country where admittedly people are starving, it is a crime to waste even a single grain.”

In response to this, Prime Minister Manmohan Singh remarked that the Supreme Court should keep away from policy matters such as distribution of food grains among the poor.

“There is a strong push by private companies to enter the food market and the government eventually wants to shut down the PDS entirely and bring in cash transfers. The more and more you make a system dysfunctional the more you make it inefficient,” says Gopalkrishnan. 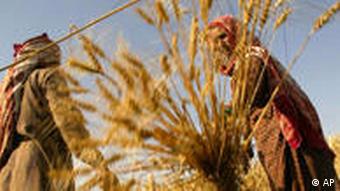 “It was, after all, a policy decision to spend almost nothing for years on building additional public storage space for food grain. The government has the money to subsidize the building of new cities, malls and multiplexes across the country by giving incentives to private builders and developers. But none for building storage space for the nation's food grain,” says P.Sainath.

Goplakrishnan noted that no measures had been taken so far, but that maybe there was something in the pipeline.

There is one scheme soon to be launched by the FCI, which would hire private granaries for grain storage, preservation and maintenance on a one-year guarantee basis.

Ultimately, efforts are aimed at finding long term solutions by way of constructing FCI owned facilities and silos under a new five-year plan.

The Chinese government does not like to talk about certain parts of its past - like the worst-ever famine caused by man. Yang Jisheng's book, 'Tombstone,' which deals with the issue, has been published in German. (22.06.2012)

The UN children's agency has highlighted the global water crisis ahead of a UN summit on sustainability. Every day around 3,000 children die of diarrhea caused by unsanitary conditions, UNICEF said in its annual report. (20.06.2012)