Scientists are awaiting news from the Rosetta comet mission, its Philae module landed on the surface of comet 67P. Early data suggested the probe may have hit a snag, although the situation has been declared stable. 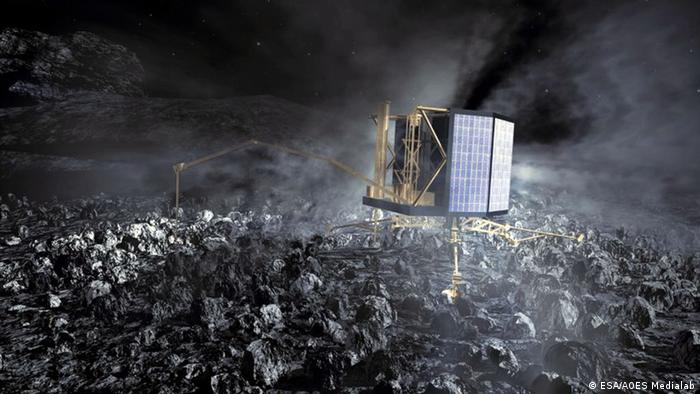 With communications severed as the "mothership" Rosetta spent a period of its orbit on the far side of the comet from Earth, information was limited about the degree of success of Philae's landing.

Mission chiefs based in the German city of Darmstadt said the European Space Agency (ESA) lander, Philae, failed to anchor to comet 67P/Churyumov-Gerasimenko, after landing on Wednesday. However, the probe still managed to send back some scientific information and was declared to be in a "stable" situation on Thursday.

The 100-kilogram (22 lb) module appears to have landed on a soft surface, but it is feared that it is not anchored. The harpoons that Philae had been due to fire to secure itself did not deploy successfully.

It is believed that the probe touched down largely as planned, except that it may have bounced once off the surface before coming to rest. "Hopefully, we are sitting there on the surface at a position different to the original landing and can continue our science," landing manager Stefan Ulamec said after Philae's descent.

Rosetta, which carried Philae on a journey of some 6.5 billion kilometers (4 billion miles) was launched into space on 2004 and took over a decade to reach its target - comet 67P/Churyumov-Gerasimenko - "Chury" or "67P" for short. It arrived in August, having been propelled to its destination by using the gravitational pull of both the Earth and Mars as a slingshot.

The probe is equipped with 10 instruments that will examine the chemistry and structure of the 67P, drilling into the comet's surface. It is hoped that the information gleaned might provide scientists with a greater understanding of the origins of the solar system.

Comets are thought to be clusters of ice and carbon dust left over from the formation of the solar system.

One theory is that comets may have seeded the Earth with water and the necessary carbon molecules for life to evolve some 4.6 billion years ago.