Romanian farmworkers stuck in Germany during pandemic | Germany | News and in-depth reporting from Berlin and beyond | DW | 21.05.2020

Several harvest hands from Romania could be left stranded in Germany after the farm they were working for went bankrupt. They have not been paid, speak limited German — and are scared of not being able to go home. 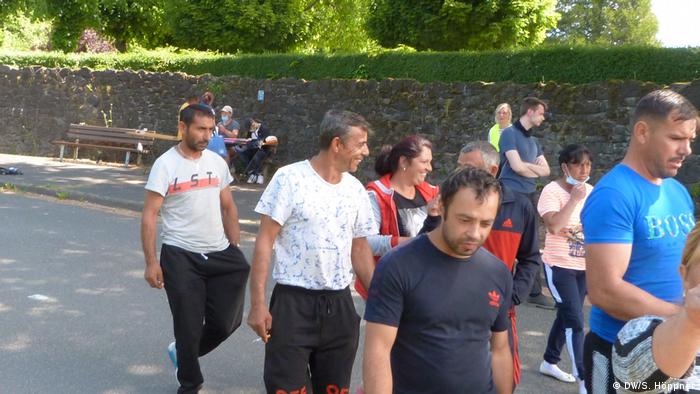 Anca, a 39-year-old who does not want to be photographed or use her real name for publication, has been waiting for the pay owed to her and other seasonal workers from Romania who had picked strawberries and asparagus at a farm that has gone bankrupt in in the town of Bornheim, near the western German city of Bonn. Now, a solution seems in sight. The Romanian consul has spoken with the workers, given them a meal and some money — and, most importantly, promised to help. "He said that we should trust him," she said, "and not be so worried."

It was Tuesday when Anca found out that the Romanian consul was ready to give his support. She and her colleagues had spent several uncertain days. They demonstrated in the center of Bonn with members of the Free Workers' Union. The anarcho-syndicalist labor organization and other sympathetic Germans have sided with the Romanian workers. Journalists have thronged to the farm, worried neighbors are looking on, and mainstream unions are assessing the confusing situation.

The workers had been employed by the farm during previous seasons: Anca said the owner had always looked after them well. But, this year, things changed. The farm is now being supervised by a trustee. "We didn't know that the company was bankrupt when we came," Anca said. The employees traveled to the farm and were called on to work to ensure a good harvest for any new potential investor.

But the coronavirus pandemic exacerbated the problems. Restaurants and hotels stayed closed, meaning that the demand for asparagus dropped dramatically. The farm's creditors decided to stop the asparagus harvest, while the picking of strawberries was reduced — along with the numbers of workers. 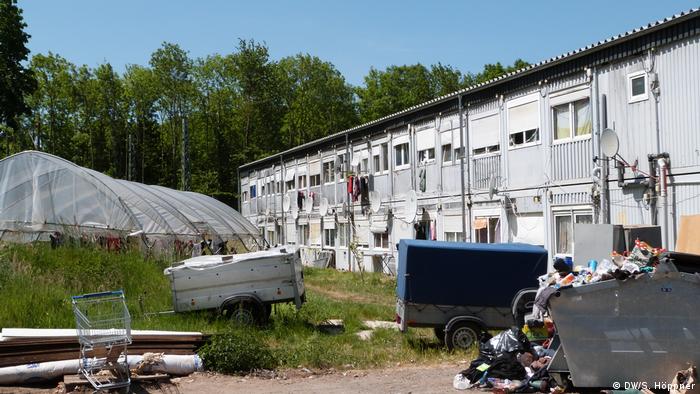 Even though she had come from Romania on a contract for three months starting at the beginning of March, Anca was one of the workers cut. She and other seasonal workers at the farm say they have not received full pay for their labor so far. "I'm still down about €1,200 ($1,315)," she said. Others have told her that they have only received €150 — or, in some cases, €5 — for a whole month's work. To make things worse, the employers have deducted more money than expected for accommodation and food, the workers say.

"The rice was still half-frozen and not cooked through," Anca said. "Some of the salami for breakfast was off. We weren't allowed to eat leftovers in the kitchen; there was always just one portion for each person." It is difficult for the workers to do their own shopping: They are housed in the middle of nowhere — near a sewage treatment plant and far away from any supermarket. She said the prefab huts that the employer had provided were acceptable, if a bit old. "It's not like home," she said. The high heaps of garbage piled up outside the huts made that clear.

Workers need every penny they earn. "Many of us have families, children, debts," Anca said. She has four children and other family members to provide for.

Many lack the money to travel home. Romanian Labor Minister Violeta Alexandru, who came to Germany to see the situation for herself on Wednesday, has promised to help out. That assistance could prove urgent: It is not clear how long the workers will be permitted to stay in the lodgings provided for them by the farm. There are rumors that electricity and water will soon be cut off to force out the harvest hands who have nowhere else to go but are no longer employed.

DW could not independently verify the workers' account of their circumstances or the total remaining amount of money owed to them. The area where they are living is sealed off, and security guards watch over who goes in. The bankruptcy trustee is not available for comment. Bonn's daily General-Anzeiger newspaper reported that the trustee spoke of an "advance payment" to the workers, with the remaining money to be paid after the contract had terminated.

Harald Schaum, the deputy chair of the BAU union, which represents agricultural, environmental and constructions workers, said his syndicate was trying to get more detailed information from the trustee. He said the situation was "not an isolated incident." Media have repeatedly reported on the indefensible state of affairs at asparagus farms in Germany. It is not a new problem, but one that has come increasingly into view during the coronavirus pandemic, when restrictions were eased to allow for foreign workers to travel to Germany, where they are paid a substandard wage that makes it difficult to attract domestic labor.

"We often discover that a range of different methods is being used to undercut the legal minimum wage," Schaum said. "People are either paid a piece wage, or a separate contract is made with high costs for board and lodgings — all completely against the rules."

Normally, an hourly wage is required, unless other clear work agreements have been made. "But, unfortunately, the language barrier is sometimes also exploited," Schaum said, "with employers doing something completely different from what is expected by the workers or has been communicated to them."

Read more: China is a coronavirus friend in need, but is it a friend indeed?

Anca said she received a contract in both German and Romanian. "If you can read, then you can read it," she said. However, some of the seasonal workers don't speak Romanian, but Romani, the language of the Roma people. What is more, some can't read — especially not the bureaucratic language used in a contract.

The procedure for dealing with workers' wages when a company or farm like the one in Bornheim goes bankrupt is not straightforward. Schaum said it was unclear whether seasonal workers were eligible for unemployment compensation paid to employees of bankrupted companies in Germany. This is particularly the case, he said, "when strawmen like agents and mailbox companies from abroad are involved," he said, referring to organizations and individuals who recruit workers for farms.

Despite having labored for months, workers could end up with nothing. Schaum said many could simply seek out a more trustworthy agricultural concern so that they receive at least some money.

It is unclear whether Anca will receive the money owed to her. But, despite the way her employer treated her, she intends to return next year — though to work with a different farm. She said it would be hard to trust people again, and that language remains a barrier, "but we do know how to work."

An explosion at a market in the Armenian capital, Yerevan, has killed at least 15 people and injured dozens more. The initial blast sparked a fire.

The interim president of the Amazon Labor Union helped secure the most important union victory in the United States in decades. The key to success was being himself a worker.