Romania struggling through the crisis | Europe | News and current affairs from around the continent | DW | 28.08.2009

Romania is one of the youngest members of the EU, having joined the bloc in 2007. Many still know the country best for Dracula. Zack Baddorf has this postcard from Romania and how it's dealing with the financial crisis. 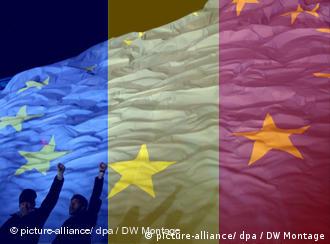 I grew up in Newark, Delaware, a college town in the US of about 60,000. Today, I live in Barlad, a city of about the same size, located in Romania's east. My job in Romania is to work as an American Peace Corps volunteer, teaching English at a local industrial high school.

Life for me here is not terribly different than it is in America.

There's a main street with lots of little restaurants and shops. You can buy high-end electronics, like laptops, at one of the many tech stores in town. I can drink Guinness beer at a bar in the city center. Everyone has cellphones, even little kids. I live in a studio apartment where I have hot water, high-speed internet, a washing machine and a microwave.

A surprise for visitors from the US

Friends and family who have visited me in Romania have been surprised to find how developed my host country is. I guess they expected to find just dirt roads with lots of beggars and overt poverty. 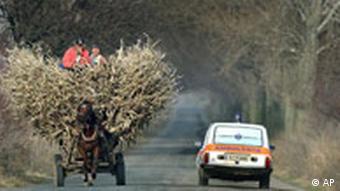 30 percent of the country lives below the poverty line

In fact, there are dirt roads and there is a lot of poverty in Romania. The World Bank says about 30 percent of the country lives below the poverty line. The average monthly salary is about 350 euros ($500).

I've heard of people living on monthly pensions of just a few hundred Romanian leu, about 50 euros ($70). But from the outside, Romania's cities, especially in Transylvania, are as beautiful as Paris.

I moved to Romania last February. This was when the country had the fastest growing economy in the EU. Then, the world economic crisis hit Romania. And it hit hard.

Last month, Romania had the highest inflation rate in the EU – about five percent – and the government took out a nearly 27 billion dollar loan from the International Monetary Fund – that's about 10 percent of Romania's total GDP.

The financial crisis has made life tough for many Romanians. Just in the past few months, thousands of people in my city have lost their jobs. A lot of work in Barlad comes from the city's production of bread and of ball bearings. But the ball bearings factory has shut down temporarily. And the bread factory has laid off half of its thousands of employees. 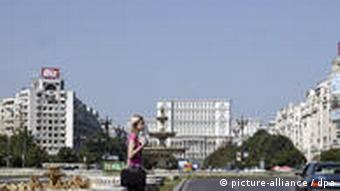 The government talks about recovery, economists about an "uncertain" future

Romania is home to about 22 million people. About half a million Romanians are officially unemployed. In my county, about 12 percent of people don't have work. That's according to Romania's National Employment Agency, but "real" unemployment may be twice as high.

As a result of lost jobs, people are having a tough time paying their bills. Romania is planning on switching to the Euro in 2014, but already people are paying their rent and making car payments in euros.

Since the Romanian leu has dropped in value, people are paying 25 percent more than they had expected. The salaries, paid in leu, are staying the same, and in the case of some government jobs, even dropping.

While Romania's president has said economic recovery is on the horizon, economists say Romania's future is "uncertain". In Barlad at least, I think we can be sure it'll be a few years before people drink champagne on New Years Eve.

Romania is set to receive a nearly 20 billion euro ($27 billion) aid package cobbled together by the International Monetary Fund, World Bank and the European Union to help it weather the ongoing financial crisis. (26.03.2009)

Romania could follow Bulgaria by having millions of euros in EU funding frozen after the bloc's executive issued a critical report Thursday, Feb. 12, suggesting Bucharest was not doing enough to fight corruption. (12.02.2009)