The guitarist formed one of the most popular rock bands from the 1970's and 1980's with his brother, Alex. He was most well known for his experimentation on the guitar and taking rock music to new places.

"He was the best father I could ever ask for," Wolf Van Halen wrote. "Every moment I've shared with him on and off stage was a gift.

"My heart is broken and I don't think I'll ever fully recover from this loss. I love you so much, Pop."

Wolf played with his father as a bassist in the band. Eddie Van Halen was 65.

Eddie formed the group in 1972 with his brother, Alex Van Halen. The band started as Genesis and did not change its name until 1974. Their self-titled first album, released in 1978, jumped to Number 19 on the Billboard charts, becoming one of the most successful debut albums of the decade.

The album included hits like "Runnin' with the Devil" and Eddie's guitar solo "Eruption." The original line-up, which included bassist Michael Anthony and lead singer David Lee Roth, would release five more albums over the next six years, including "Van Halen II" and "1984."

Their sound grew progressively heavier from the 1970's into the 1980's, churning out hits like "Jump" and "Hot for Teacher," which are still popular on the radio. 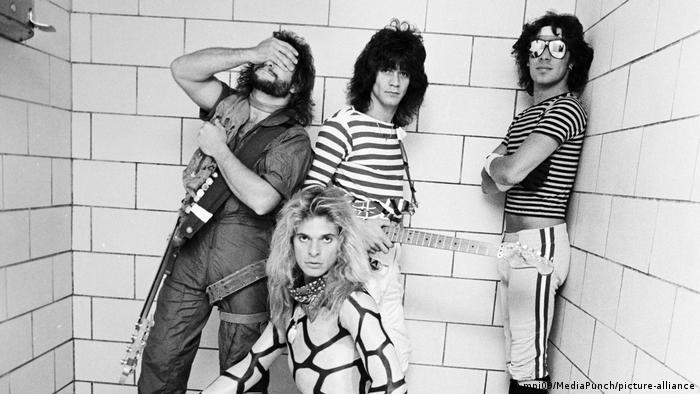 The original line-up of Van Halen released several hits over the years, including "Jump" and "Hot for Teacher"

'He was so damn good'

"Eddie put a smile back in rock guitar, at a time when it was all getting a bit brooding. He also scared the hell out of a million guitarists around the world, because he was so damn good. And original," said Joe Satriani, a fellow guitarist and composer, in an interview with Billboard in 2015.

The original group split in 1984 after tensions erupted within the band following a world tour. Eddie Van Halen remained a member of the group for the rest of his life, along with his brother, Alex.

Beyond the band Van Halen, Eddie Van Halen also contributed to one of the biggest singles of the 1980's, playing a guitar solo in Michael Jackson's "Beat It." He did it for free as a favor to producer Quincy Jones while the rest of the band was out of town.

"It was 20 minutes of my life. I didn't want anything for doing that," Eddie Van Halen told Billboard in 2015.

Van Halen's music has appeared in popular TV shows and movies, including "Glee," "Superbad," and "It's Always Sunny in Philadelphia."

Eddie Van Halen was born in Amsterdam in 1955 and moved to California with his family in 1962.

"We showed up here with the equivalent of $50 and a piano," Eddie Van Halen told the Associated Press (AP) in 2015. "We came halfway around the world without money, without a set job, no place to live and couldn't even speak the language."

He recounted the story at the National Museum of American History in 2015.

"If that's not the American dream, what is?"

Texan girl, blues queen and music pioneer: The iconic figure in the 1960s hippie and women's liberation movement died 50 years ago, on October 4, 1970.