Covering five centuries, the "Robots" exhibition at the Science Museum in London boasts the most important collection of androids ever displayed. The show explores humanity's obsession - and unease - with them.

Instead of focusing on how they're made, "Robots," the London Science Museum's new blockbuster exhibition, looks into why humans have always been obsessed with creating an automated version of themselves.

The exhibition features an extensive collection of over 100 robots, from a 16th-century mechanical monk to the most advanced models. The development of these human-machines over the last 500 years reflects religious beliefs, the industrial revolution, popular culture and visions of the future.

Androids are both figures of fascination and terror. This aspect has guided the organizers of the exhibition, which opens with an animatronic baby that manages to awake emotions in people.

"Coming face to face with a mechanical human has always been a disconcerting experience. Over the centuries, each generation has experienced this afresh as new waves of technology heralded its own curiosity-inducing robots. That sense of unease, of something you cannot quite put your finger on, goes to the heart of our long relationship with robots," said Ben Russell, lead curator of "Robots."

A growing sense of unease

With some exceptions like C-3PO and R2-D2 in "Star Wars," robots are predominantly portrayed in movies as threatening figures. Now Hollywood is not the only one to envision them taking over the world: Even the world-renowned physicist Stephen Hawking has warned that "the development of full artificial intelligence could spell the end of the human race." 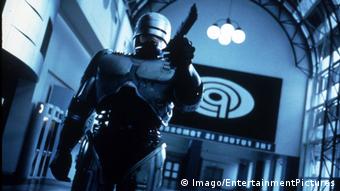 Developing incredibly quickly, advanced intelligence comes with a series of social, philosophical and economic implications. Do the risks outweigh the opportunities? The exhibition also tries to answer such questions, with discussions such as "When will robots outsmart us?" and reflections on "What it means to be human."

The London show runs from February 8 to September 3, 2017 and will spend the following five years touring different museums in the UK and around the world.

Click through the gallery above to discover highlights of the "Robots" exhibition.

Estonia has made a name in the field of technology and innovation, and is home to start-ups testing new gadgets. Robots are part of daily life in the capital Tallinn, where they’re popular for take-out deliveries.  (06.02.2017)

At the Berlin gallery "Dixit Algorizmi", you can have your portrait painted by robots. French artist Patrick Tresset came up with the idea of programming the robots so that they can draw pictures.  (26.01.2017)

The German Museum of Technology has a new employee. A one and a half meter tall android service robot aided by computer-controlled motors is to guide visitors in the museum. (09.11.2016)

Will robots take over?