Poland's parliament has passed controversial changes to legislation concerning the appointment of constitutional court judges. The move was criticized by rights groups and opposition lawmakers. 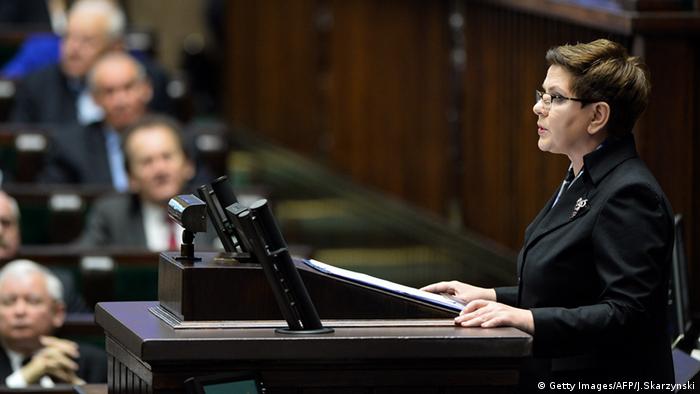 Following October's elections dominated by the conservative Law and Justice (PiS) party, Poland's new parliament this week passed an amendment providing it with the right to appoint replacements for five judges on the 15-member Constitutional Tribunal.

PiS party-ally President Andrzej Duda on Friday ratified the amendment, which is expected to come into force on December 4.

Jaroslaw Kaczynski, leader of the PiS party, said that the previous government had transformed the Constitutional Tribunal into a "party-run institution."

"We want to change that in the name of the interests of the majority of Poles," Kaczynski said.

However, the new parliament's decision was lambasted by human rights groups and opposition lawmakers, claiming it undermined the country's judiciary.

Poland's incoming government has announced it will no longer take in refugees due to the recent Paris attacks, calling for 'security guarantees.' Germany has warned against hastily linking Paris and the refugee crisis.

The move prompted opposition lawmakers from the former ruling party Civic Platform and the agrarian PSL party to walk out of parliament in protest.

Implementing the amendment "would undermine the functioning of the most important part of the judiciary and may have directly a negative influence on the level of protection of rights and freedom in Poland," said a statement by the Helsinki Foundation for Human Rights based in Warsaw, reported Reuters news agency.

Council of Europe's Human Rights Commissioner Nils Muiznieks said the legislation "should be withdrawn" for subverting the "rule of law."

"The amendments altering the composition of the Constitutional Court currently rushed through the Polish Parliament undermine the rule of law and should be withdrawn," said Council of Europe's Human Rights Commissioner Nils Muiznieks.