The house where composer Richard Wagner once lived - a museum since 1976 - has been restored, renewed and expanded. After three years of work, it opens its doors to visitors on July 26. Here's a sneak preview.

The individual rooms have been robbed of their former charm, and there are fewer exhibits and less information, some will say.

Others will counter that it's a truly multimedia exhibition that can be appreciated in a single visit - a refreshing rather than exhausting experience.

Like everything else surrounding Richard Wagner and the Bayreuth Festival, there is certain to be controversy over the new Richard Wagner Museum complex. Fifteen years from the initial idea to its completion, three years of construction work, and overall expenditures totalling 20 million euros ($22 million) have yielded a vastly expanded facility with double the exhibit space, subterranean archive and a first-ever coming to terms with 20th-century festival history in general and the Third Reich in particular. 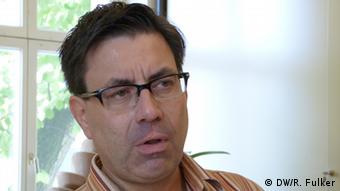 The complex wasn't ready for the Wagner bicentennial in 2013, but Sven Friedrich is pleased with the results nonetheless

Yet despite all that, "The museum is like an iceberg," said Sven Friedrich, director of the Richard Wagner Archive in Villa Wahnfried, just before giving DW an exclusive tour. "The majority of the construction costs were caused by the air conditioning system, making the facilities handicapped-friendly, and the underground facilities. The actual museum came at a cost of only two million euros."

It's Wagner, not Disneyland

Getting my first glimpse of the rooms in the house known as Wahnfried, I assumed that most of the pieces would be uncovered before the exhibition officially opens on July 26. These rooms, dedicated to the time when Richard Wagner and his wife Cosima lived there, are full of furniture covered in protective cloths and everyday objects under glass jars. Wrong, I was told: This is how it will stay. It's supposed to look as though Richard and Cosima were away on a trip, had had their furniture covered, and were due to return any moment.

But Friedrich revealed more important reason for this striking approach: "We didn't want to add fake historic-looking pieces to the originals. That would have cheapened them. We didn't want to create a Disneyland." 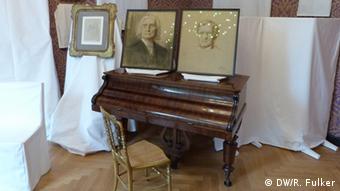 Wagner, Liszt, and the piano - all original paintings, instruments and objects in the museum

One familiar with the Wagner Museum as it existed here from 1976 until 2012 will miss certain objects, pictures and, most of all, written information. "That's because we decided to display only the most valuable pieces," answered Friedrich. The missing information on the walls is now conveyed by texts and images on tablets that lead the visitor from room to room, he explained.

An interactive score is one new interactive feature. You open the cover and turn the pages while images are projected on them that illustrate the process of composition. Another is the multiple rows of headsets where visitors can listen to recordings.

Just listen, there's nothing to see 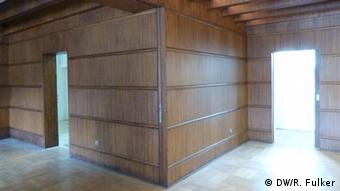 This is how the Siegfried Wagner house will continue to look: empty

Not interactive, but certainly multimedia is a small movie theater - and most of all, the new exhibition in the Siegfried Wagner house. "What exhibition?" I found myself thinking again, wondering how they could possibly get everything in place before the museum opens.

With nothing but dark wood paneling in them, the rooms have an oppressive feel. And that's the point. Nothing will be added to the 1930s original decor that Winifred Wagner lived in. Instead, the rooms themselves - where Adolf Hitler was once a guest - literally speak, with recorded voices narrating the darkest period of festival history. With nothing to attract the eye upwards, it wanders downwards instead, as though in shame, to floor-level monitors with a collage of pictures, texts and moving images. 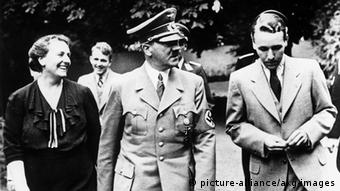 Thinking about it, it makes sense. The Nazi perversion of Wagner's art is an abstract theme that is difficult to comprehend out of context or by means of pictures or objects. "Wagner and ideology" is a broader issue, however, extending to Wagner criticism by philosopher Friedrich Nietzsche and author Thomas Mann, the critical stance of Wagner's descendants Franz Beidler and Friedelind Wagner, and the Frankfurt School of philosopher and musicologist Theodor W. Adorno. Those issues are taken up in the Siegfried Wagner House as well.

Adapting to the times

The most striking and expansive new facility is mostly underground and was designed by Berlin museum architect Volker Staab. Apart from the rooms displaying Bayreuth Festival history after the death of Richard Wagner, it houses the National Archive of the Richard Wagner Foundation, including the composer's original scores and letters. A critical edition of the correspondence by Richard and Cosima Wagner still awaits publication, says Friedrich. Enabling that will be the next order of business by the Richard Wagner Archive. 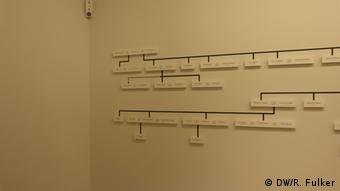 The Wagner family tree stretches across an entire wall

Mixed opinions have always been part of the Bayreuth Festival, so why should Wahnfried be any different? The covered substitute furniture and the pieces once treasured by visitors but not shown, will likely be a bone of contention that the museum shop and café could potentially make up for. As for the air-conditioning? These times, they are a' changin', wrote a different bard.

Black tie is a must as some of them, and yes they can be as stuffy as they sound. But these classical music festivals are worth getting spiffed up for, says DW's Rick Fulker. (14.07.2015)