A year after the disastrous oil spill caused by an explosion on the Deepwater Horizon drilling platform in the Gulf of Mexico, Norwegian scientists use a simulator to improve safety procedures and prevent such accidents. 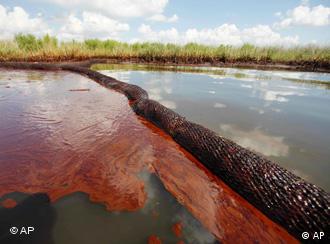 More research needs to be done into containing oil spills

The BP drilling platform Deepwater Horizon exploded one year ago, and for over three months, oil gushed into the Atlantic Ocean. By the time the leak was stopped, it was estimated that more than 800 million liters (211 million gallons) has spewed into the water.

While the long-term effects on the environment are still being determined, laboratories around the world have been researching ways to stop similar oil accidents from reoccurring, or at least ways of getting spillages more effectively under control.

International experts took part in last year's operation to clear oil from the Gulf of Mexico, including some from the Norwegian research group SINTEF. 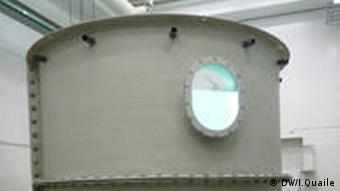 SINTEF has developed a tank that simulates an underwater blow out

Oil research has a long tradition in Norway. The Scandinavian country has been drilling for oil in the North Sea since 1971. SINTEF runs a sea lab directly at a fjord in Trondheim, where a pipeline supplies fresh sea water from a depth of 90 meters.

Oil in a high-tech tub

Researcher Svein Ramstad opened a heavy door, to reveal a machine that looks like a huge bathtub and sounds like a loud washing machine. Black oil floating on the top of the water in the machine is dispersed by the movement of a wave generator.

"We can see how oil separates into small drops, or how it mixes with water, or how it evaporates," Ramstad said.

Above the bathtub, a strong UV-lamp simulates sunlight, and researchers can adjust its temperature to imitate different regions and situations. Last year, the temperature was set to 32 degrees Celsius (90 degrees Fahrenheit), and oil samples from the Mexican Gulf were studied in order to find a way to fight the oil slick.

All oil is not the same. The information about how different types of oil behave under certain conditions - including temperature and salt content in the water - is vital to clearing oil, said Per Daling, one of Ramstad's colleagues.

From light oil that evaporates quickly to heavy oil that stays in the sea for a long time and can drift long distances, Daling has been studying all kinds of oil for over 25 years.

"You have to know what kind of oil it is, and how it reacts in seawater in order to find the best technique for a given situation," he said. "You have to make a total evaluation of what are the best response options that lead to the least environmental damage." 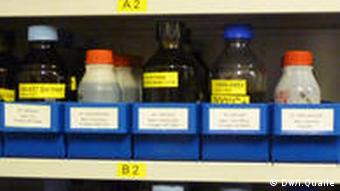 Different types of oil are stored in the SINTEF laboratory

There are three main methods for treating an oil spill: skim it away, burn it off or treat it with dispersant chemicals. Daling is a specialist in chemicals that divide the oil into small drops so that oil-eating microbes have an easier time processing it. It was this experience that brought him to the Deepwater Horizon's crisis team.

"The Norwegian government allows us to release oil into the North Sea once a year under controlled conditions," he said. "That's when we experiment with different techniques - both mechanical and chemical."

Nearly 8 million liters of chemical dispersants were used in attempts to contain the Gulf of Mexico spill, and experts are now arguing over the procedures' effectiveness. Daling said he is convinced that the chemicals helped degrade the oil on the surface and prevented even more oil reaching the shore.

But it is not yet clear what effects the massive quantities of these chemicals - as well as the dispersed oil - had on local eco-systems. It will perhaps only become apparent in the long-term.

Daling said modern chemicals are much less toxic than their predecessors, but added that there are many areas in which they shouldn't be used, for instance in fish spawning areas. In the meantime, SINTEF scientists are trying out a new method that uses water pressure to disperse the oil. The experiment is to last a year.

Information from the sky 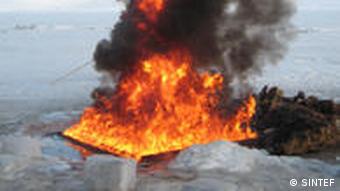 Oil from a spill can either be skimmed up, burnt off, or dispersed with chemicals

Companies including the Norwegian Clean Seas Association (NOFO) are interested in the technology that SINTEF is developing. The Gulf of Mexico disaster made a big impression on his organization, according to NOFO consultant Jörn Harald Andersen.

He said it's too early to know exactly what has been learnt from the disaster, but certain key challenges have been identified, like how to have the ships with the necessary equipment adjust their positions to currents and wind-speeds so they will be in exactly the right place at the right time.

The availability of satellite pictures and specially equipped airplanes to predict the path of an oil spill are also on the list of clean up necessities, he added.

"You can really only fight about 10 percent of an oil spill," Andersen said. "The rest evaporates or is too thin to be separated from the water. But it's difficult to identify which part can be fought from the bridge of a ship."

In 2010, as oil continued to pour into the Gulf of Mexico, a team of scientists visited the spill site to measure pollutant levels - and shed new light on what might be a major player in urban air pollution. (11.03.2011)

Paying for their messes: the record for oil companies isn't stellar

People affected by the Exxon Valdez oil-spill disaster had to wait two decades before being compensated. It could well be the same with BP, since oil concerns often find ways to avoid paying compensation after spills. (20.07.2010)