Alcohol was the drug of choice in East Germany, where it was consumed at the workbench, in the office and at party headquarters, according to a new book. East Germans spent more on alcohol than any other Europeans. 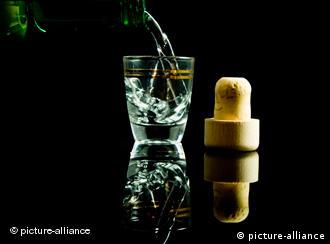 Whatever the occasion - a holiday, a company party, International Women's Day or the Day of the Republic on October 7 - drinking alcohol to excess was the norm in the GDR. Historian Thomas Kochan gets to the bottom of East Germans' relationship with alcohol in his new book, "The Blue Strangler - Drinking habits in the GDR."

In a doctoral thesis funded by a federal foundation dedicated to reassessing the East German socialist party, the SED, examines the political intentions behind the production of alcoholic beverages, how the GDR dealt with alcoholism and the significance of alcohol and inebriation in the daily life of GDR citizens.

He found that even party members like Alfred Neumann - who were supposed to set a good example - often hit the bottle. Kochan's research suggests that Neumann, who was a member of the Politbüro, the ruling Communist party's central committee, from 1958 to 1989 and a known hardliner, frequently outperformed his own comrades and construction workers when it came to drinking alcohol in public. 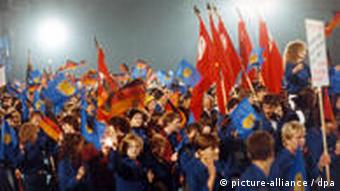 Members of the Free German Youth (FDJ), the GDR's official youth movement, even sung a song about beer. "We were born in a state where malt and hop do not lose," they used to sing. "What do I drink, what do you drink, what do we drink? Beer, beer, beer!"

"Come comrade, sit down here and drink the beer which relaxes many a tongue. Discussions over a beer are productive and strengthen many a collective," according to another folk song.

Bribes involving alcohol were common in East Germany, where there were always shortages, Kochan says. He found that the use of alcohol was widespread, yet also somewhat naive.

In 1977 a specialist in internal medicine from the north-eastern German city of Magdeburg estimated that five percent of all adults in the GDR were addicted to alcohol - four times the rate in the Federal Republic of Germany at the time.

Basic everyday items like ketchup and paper tissue were hard to come by in the GDR, yet alcoholic beverages were almost always available. Crystal vodka, which contained 40 percent alcohol, was especially popular and was affectionately known as "blue strangler," owing to its blue label.

Collectives owned by the people produced a total of 15 types of beer and around 30 types of liquor by the end of the 1980s. Prices ranged from 15 Marks for a local cherry brandy to 80 Marks for a good cognac. That was a hefty sum, given that the average salary was 500 Marks. 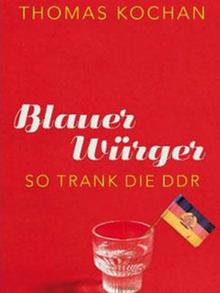 Thomas Kochan investigated alcohol use in the GDR

Despite the steep prices, high proof alcohol was popular and the average GDR citizen drank 23 bottles of liquor a year - more than double the amount consumed by the average citizen of the Federal Republic of Germany.

This high per capita consumption made the GDR the world's heaviest drinker when it came to spirits. Statistics from 1988 suggest that the average GDR citizen also knocked back 12 liters of wine and 146 liters of beer a year.

Kochan says alcohol played a major role in social life. Women who wanted to lose weight were even advised to go on a vodka and sausage diet. Flagship socialist women's magazines promoted the diet in the 1980s.

Alcohol abuse was not discussed publicly and, in a bid to prevent reality from tarnishing the propagandistic ideal of the honest worker, GDR officials did not publish any statistics on it at first.

"Alcoholics were an embarrassment to the SED party leadership," said Thomas Kochan. Drug addicts could only be found hanging round the train stations in West Berlin, Hamburg and America, according to the official GDR line, which viewed the West as its enemy.

A sober and peaceful revolution

Party officials did not know how to deal with the problem. It wasn't until 1983, when the documentary film "Addicted" was produced by state-run film company, DEFA, that the dangers surrounding alcohol were spelled out. 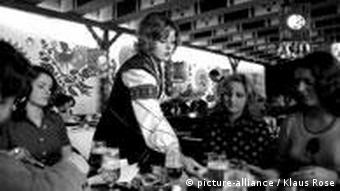 Alcohol was an important part of everyday life in the GDR

The film tells viewers about Rostock-based shipbuilding company Neptun Werft's in-house alcohol support center. As it began to feature more prominently in the media, alcohol abuse became a subject of public debate in the late 1980s.

As a result, there was a noticeable decline in consumption. A report written by the Council of Ministers in 1989 found that people had bought 82 hectoliters less alcohol than in the previous year.

When the peaceful Monday demonstrations against the authoritarian government of the GDR got underway in autumn 1989, alcohol consumption sank to a historic low within a matter of weeks.

The sports doping program carried out by the former East Germany may be decades in the past, but many one-time athletes still carry the scars - physical and mental - from that time. (01.10.2010)