Rescue operation seeks to save hundreds of whales off Tasmania

Around a third of the whales are already presumed dead ahead of a mass rescue operation. Australia has seen its share of whale strandings off its beaches. 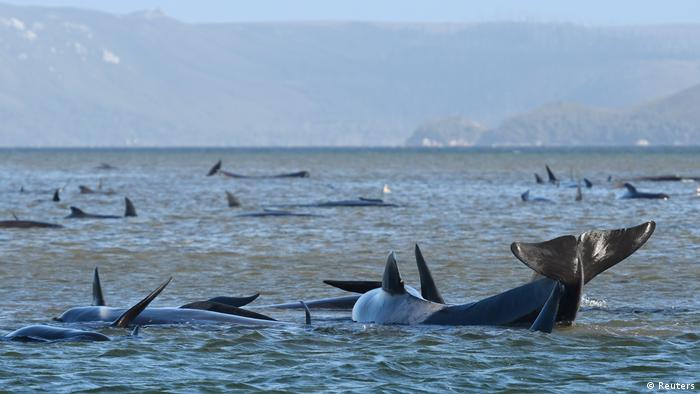 Rescuers and scientists launched an operation early on Tuesday seeking to save some 270 pilot whales that are stranded in a bay on the Australian island of Tasmania.

Tasmania's environment department said the whales became stuck on a sandbar in Macquarie Harbour on the island's sparsely-populated west coast. A team of government marine conservation experts are in the area to assess the situation and determine a rescue plan.

"Marine conservation experts are assessing the scene of a mass whale stranding on Tasmania's west coast in order to map out a rescue mission over the coming days," Australia's Marine Conservation Program said in a Facebook post.

The whales are stranded at three sites in the area. The rescue effort would begin early Tuesday with an out-going tide.

"That will be in our favor. We'll be aiming to make the most of that window," said Tasmania Parks and Wildlife Service manager Nic Deka.

Marine Conservation Program wildlife biologist Kris Carlyon said most of the whales were not accessible by boat and that by Monday evening one-third were already presumed dead.

The other whales' conditions were not fully known.

One of the large pods of whales was on a sandbar in the harbor, while another pod was located a few hundred meters away.

The rescue is expected to take several days, as a team of some 60 individuals attempt to refloat individual whales and assess their reaction.

Pilot whales are robust and that if conditions stay cool they should be able to survive for several days, Carlyon said.

Deka said the area had seen mass strandings of whales before, owing to whales' navigation patterns and potential "false echoes."

Tasmania has not had a mass stranding of this magnitude in about 10 years. The last such stranding involved a smaller pod of sperm whales in the same location.

Smaller numbers of whales get stuck in Australia at a frequent rate. Earlier this month, a trio of humpback whales were stuck at the mouth of the East Alligator River in Australia's Northern Territory while on their annual migration path to Antarctica. One went well into the crocodile-infested river, to a point where the river was only 4 meters (13 feet) deep.

"It could have been chased up by some big sharks, or maybe it was just a wrong turn," said Northern Territory government whale and dolphin scientist Carol Palmer.

But the whale was set free on Monday after staying in the river for nearly two weeks and rejoined the migration.

"The whale made its way out on the high tides of this weekend and we're pleased it appeared to be in good condition and not suffering any ill effects," said Kakadu National Park manager Feach Moyle in a statement.