The longtime president of the Republic of Congo is set for another five-year term after getting over 88% of the vote. The election day was marred by the death of his main opponent, Guy Brice Parfait Kolelas. 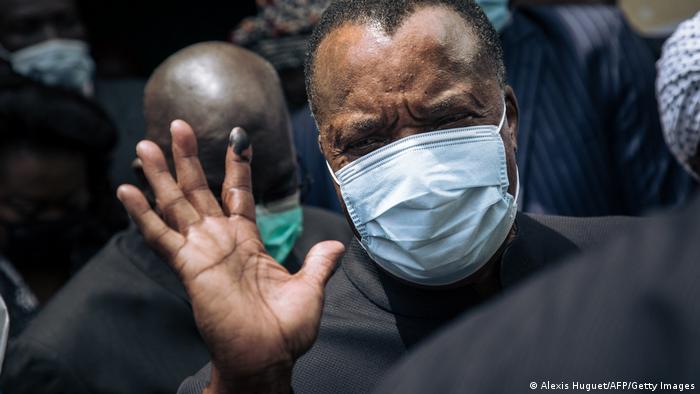 Despite an ongoing economic crisis in the Republic of Congo, the country's veteran President Denis Sassou Nguesso has been reelected with more than 88 percent of the vote, official results showed on Tuesday.

"By this vote, the people in their majority responded and said that we had the capacity to bounce back, to recover our economy, and to move towards development," Sassou Nguesso said in a brief victory speech.

The landslide victory for SassouNguesso had been widely expected, given the 77-year-old's strong grip on state institutions.

The ballot on Sunday saw a 67.55 percent voter turnout. Voting was largely boycotted by the main opposition and took place under an internet blackout.

What happened to the president's main rival?

The election day was overshadowed by the death of Guy Brice Parfait Kolelas, the president's main rival in the race.

Kolelas was initially believed to have had malaria but tested positive for COVID-19 on Friday afternoon.

He was being flown to Paris for treatment but died aboard a medical plane just hours after polling closed, his campaign director Christian Cyr Rodrigue Mayanda told news agency AFP.

The challenger received less than 8 percent of the vote, according to results announced by the interior minister citing figures from the electoral commission.

In a video message posted on Saturday, Kolelas declared he was "battling against death."

"Rise up as one person... I'm fighting on my deathbed, you too fight for your change," he urged his supporters, adding that the election was "about the future of your children."

Two other rivals of Sassou Nguesso were convicted of crimes after the last election in 2016.

Who is Denis Sassou Nguesso?

The African leader is one of the world's longest-serving presidents, earning him the nickname "emperor." He has led Congo for a total of 36 years and is now poised for another five-year-term.

The former paratrooper first became president in 1979 and remained in power for three consecutive terms.

He lost the country's first multi-party elections in 1992, but he returned to office in 1997 after a civil war.

In 2015, a constitutional amendment lifted the ban on presidential candidates over the age of 70, and removed the two-term limit, allowing him to run again the following year.

Meet the artist who tells Congo’s history on jute

Sassou Nguesso has long been accused by critics of authoritarian rule and turning a blind eye to corruption, poverty, and inequality despite the country's oil wealth.

The former French colony, also known as Congo-Brazzaville, has been facing an economic crisis since 2014 when oil prices collapsed, leading to mounting external debt.

The coronavirus pandemic made matters worse for the Congolese economy, which contracted by 8% in 2020 and is expected to grow by less than 1% this year.

Many millionaires live in the Democratic Republic of Congo, one of the world's poorest countries. This film depicts some of those who have made fortunes amid the chaos, including musicians, mining bosses, entrepreneurs.

A former Congolese militia leader, Ntabo Ntaberi Sheka, has been sentenced to life in prison for crimes including mass rape and recruitment of child soldiers. The UN has said the verdict gave "immense hope" to victims.