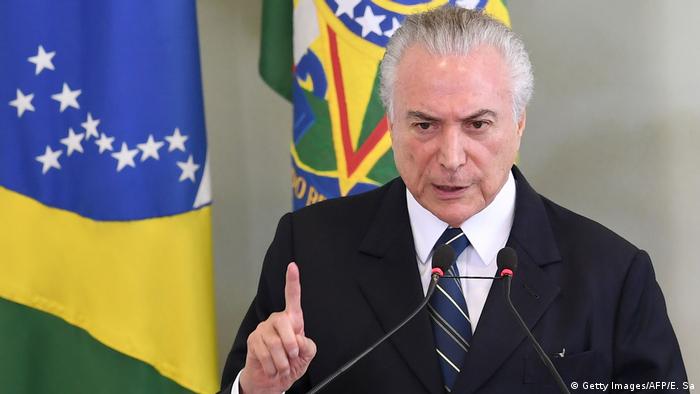 Brazil's Supreme Court has authorized an official probe into corruption allegations against President Michel Temer, according to multiple local media reports. The president has officially been in power for less than a year, after graft charges against his predecessor Dilma Rousseff led to her impeachment.

National news outlets like O Globo, Estadao and Valor Economico all reported that the investigation would move forward, though the court itself has refused thus far to comment.

Temer was allegedly recorded offering hush money to Eduardo Cunha, the former leader of Brazil's lower house of Congress. Cunha is currently serving a 15-year jail sentence after being convicted of accepting millions in bribes.

Cunha was one of the leading voices pushing for Rousseff's ouster last year.

'Brazil has no government'

Brazilian stocks tumbled at the news, both chambers of Congress canceled their sessions and Temer reportedly cleared his schedule.

The president has denied any wrongdoing, and his office has petitioned the Supreme Court to release the contents of the secret recording.

"I will not step down," he said in a short address on Thursday. "I didn't buy anyone's silence."

Should Temer suffer the same fate as Rousseff, the South American powerhouse would be plunged ever deeper into political chaos. Claims surrounding a complex web of bribery and hush money, known as the "Car Wash" scandal, have snowballed over the years to engulf many of the country's top politicians and companies.

Even if the president is cleared of wrongdoing, he remains deeply unpopular in Brazil. Many have accused him of playing a role in engineering his predecessor's downfall for his own gain.

"Brazil has no government," Rodrigues said.

Even the PSDB party, which is allied with Temer's PMDB, vowed to abandon him if the allegations were proven to be true.

Brazilian unions backed by various social movements are striking against pension and labor reforms. Organizers claim the strike will be the "biggest in Brazil's history." (28.04.2017)

President Michel Temer has predicted that his reforms will pull Brazil's ailing economy out of recession by next year. The country is facing a record high unemployment rate and its worst recession in more than a century. (30.12.2016)