Repatriation plans stir fear among Rohingya refugees in Bangladesh | Asia| An in-depth look at news from across the continent | DW | 21.08.2019

Nearly 3,500 Rohingya living in Bangladesh fear for their lives after being told they would be sent back to Myanmar. DW's Naomi Conrad and Arafatul Islam spoke to them at their shelters in Cox's Bazar. 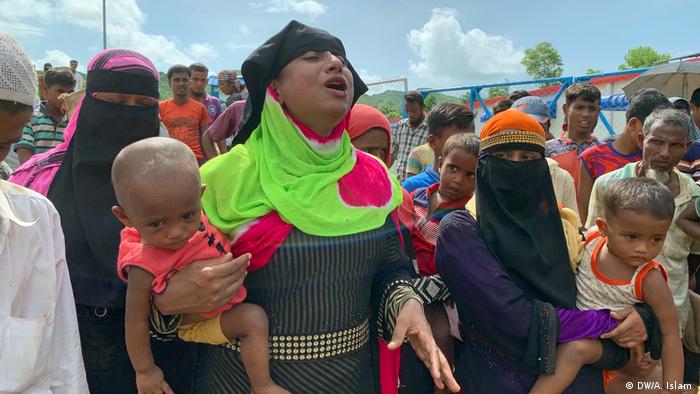 Three aid workers, carrying clipboards and umbrellas to shelter them from the burning sun, made their way down a narrow lane, lined by huts made of tarpaulin and corrugated iron. Several children scampered past as the workers stopped to enter.

They were one of ten teams sent out earlier this week to tell 3,091 residents in the sprawling Camp 29 that their names were on a list of refugees selected for repatriation to Myanmar. The camp is one of several shelters in Bangladesh's Cox's Bazar, the largest refugee settlement in the world.

Altogether, roughly 3,500 asylum-seekers have been selected to return to the country that they fled two years ago following a military crackdown, which the UN labelled as "a textbook example of ethnic cleansing."

Bangladeshi authorities have been distributing leaflets in Burmese and English, with illustrations of smiling Rohingya families. The advertisements also promise a pathway to citizenship and new housing for those who have lost their homes.

One leaflet shows the picture of a woman with a headscarf, holding a card. A caption under the picture reads, "I am a resident of Myanmar." Camp officials said the leaflets were provided by Myanmar's government.

Rohingya camps in Cox's Bazar have been equipped with primary schools and health care, thanks to funding by the United Nations and several international organizations. Some small shops have been set up along the main roads, where rickshaws transport residents.

But there are limited employment opportunities and young people in the shelters have nothing to do. There are also concerns that the security inside the camps could worsen if aid workers start to leave. Yet, refugees here say their lives in Cox's Bazar are better than they are back in Myanmar.

Sixty-year-old Rohul, for example, insisted he would not return to Myanmar. "They killed us, they burnt our lands," he said, surrounded by onlookers.

In his dark hut, his wife hiding behind a partition, 21-year-old Nur, an eloquent man who owned a vegetable store in Myanmar, felt the same way.

It is unclear who selected the names on the list. Aid workers told DW off the record that they did not know how the selection process had taken place, and believed it to be a mere diplomatic move by Bangladesh to up the pressure on Myanmar.

Several sources agreed that a list of 22,000 names had been sent to Myanmar by the Bangladeshi government. The authorities there then selected 3,450 names.

It is now up to the UNHCR to verify that those selected return to Myanmar voluntarily. No one, officials stressed time and time again, would be forced to leave against their will.

But many of these refugees don't seem to trust that that is really the case.

'We will commit suicide'

In the camp, a group of women, some clutching babies and all sporting full-face veils, congregated outside the tents where refugees were trickling in for interviews.

As the onlookers cheered, they vented their anger and frustration: they would not return, not until they got full citizenship rights and their land back. They shouted, "We have been raped, we have been abused, we will not go home."

One woman pulled up her veil and said: "If you force us back, we will commit suicide."

A policeman tried to placate the crowd, telling them that the government would not send them back against their will, but to little avail. The cacophony continued. One man tore his shirt open, gesturing to his chest: "If I need to return, then shoot me now!"

Aid workers believe that repatriation efforts may lead to fear and frustration among the refugees, pushing even more into the arms of traffickers who promise a better life in Malaysia. Many have already drowned trying to cross the Indian Ocean in rickety boats.

Most aid volunteers expect a rerun of an early repatriation attempt last year, when not a single refugee turned up.