Reggae CDs Under German Scrutiny for Anti-Gay Lyrics | Germany| News and in-depth reporting from Berlin and beyond | DW | 18.07.2008

The homophobic lyrics of several Jamaican reggae musicians has moved the German government to consider blacklisting them and restrict their sales and distribution. 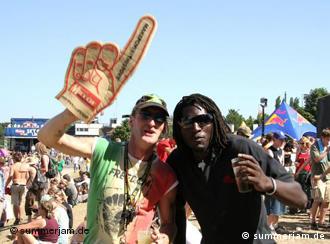 While reggae has a laid-back reputation, some lyrics can be homophobic, critics say

The CDs by Elephant Man and T.O.K. could be put on the "Index of Harmful Materials," which, while it would not censor the materials in Germany, would severely limit their advertising and marketing.

The Federal Department for Media Harmful to Young Persons will decide over the next several months if the music will be included on the index, the government said on Thursday in its response to a parliamentary inquiry.

The index includes items such as media which glorify war and violence and are intended to induce hate.

Volker Beck, the leader of the Green Party parliamentary group, called on large Internet music sellers to already begin removing the CDs in question from their sales inventory.

"Those in Jamaica who invoke hatred should not earn money with their music in Germany," he said on Thursday in Berlin.

Homosexual acts are punishable by law in Jamaica and many musicians from the Caribbean island are accused of promoting violence against gays and lesbians. In its travel advisory on Jamaica, the German foreign ministry reports that homosexuals are often the targets of assault.

Poland has recently shocked the EU by introducing regulations to stop what it called the “promotion of homosexuality in schools”. With elections due in October, many believe the anti-homophobic rhetoric will intensify. (27.09.2007)