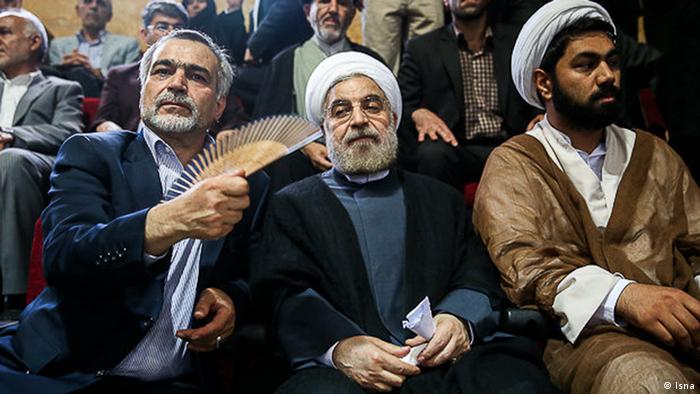 According to reports on August 31, the head of finances of Iran's Education Ministry was arrested along with his wife and child. The conservative-dominated commission against corruption stated that the equivalent of 200 million euros ($223 million) in funds had been misappropriated.

Conservative websites are celebrating the news. For months, they have been reporting in detail on corruption cases related to politicians in President Hassan Rouhani's reform-oriented government. Apparently, huge amounts of money have been misappropriated ever since economic sanctions on Iran were lifted after last summer's international nuclear deal. "Such disclosures are always linked to conflicts between the different power centers in Iran," the Iranian journalist Taghi Rahmani told DW. "There are no independent institutions that can monitor governmental and administrative institutions. Even the media is not independent, and the judiciary is not anyway." Rahmani spent 15 years of his life behind bars in Iran and now lives in exile in Paris. He feels that current reports about corruption cases are part of a broad campaign against Rouhani.

Now corruption allegations have reached the president himself. His younger brother, Hossein Fereydoun, also a politician, has been implicated in dubious business dealings. According to media sources affiliated with Iran's Revolutionary Guard, Fereydoun had apparently established an exchange office in the final years of former President Mahmoud Ahmadinejad's term. Fereydoun is said to have benefited from the strong currency fluctuation after sanctions were on Iran.

As a special adviser to his brother, Fereydoun has exerted a great deal of influence on important decisions in the Finance Ministry. Economic Affairs Minister Ali Tayebnia was called upon to clarify the matter in parliament. "If we are not satisfied with the answers, we will invite the president," MPs said at the end of August. "The president is responsible for his brother's actions."

"In all countries without deeply rooted democratic parties, we find that politicians only trust family members in delicate positions," Rahmani said. "Rouhani is not the only president in Iran who has taken his brother with him to the presidential office," he added. "His predecessors had also appointed relatives or close friends as office manager or special adviser." Rouhani's brother has been accused of filling executive positions in state banks at his own discretion. A number of these top executives were dismissed in July for "unusually high earnings." One of them was even arrested by the Revolutionary Guard.

The Revolutionary Guards is a key part of the conservative establishment in Iran. Apart from its military significance, the unit exerts an enormous influence on Iran's economy and is active in almost all sectors. The guard operate companies that work on infrastructure - from energy to arms. Before Rouhani took office, the Revolutionary Guard enjoyed good relations with the banks, but that seems to have changed.

Rouhani has often harshly criticized the Revolutionary Guard for its influence on the economy. In his election campaign, Rouhani had promised to crack down on graft, but "he alone cannot fight corruption," said Fereydoun Khavand, a law professor at Paris Descartes University. According to Khavand, corruption in Iran is systematic. "Iran's position in the corruption index has improved from No. 144 in 2013 to No. 130 in 2015. But to effectively combat corruption, a concerted effort by all authorities is required. The justice system in Iran, however, has no interest whatsoever in cooperating."

Iran's justice systems acts independently of the government and is run by the supreme leader and the Revolutionary Guard. Right now, it is opposed to the goals of the reform-oriented government and aims to prevent Rouhani's re-election next summer. "'If your brother is corrupt, then so are you' is what Iranians think," said Rahmani, the journalist. "Rouhani must pull away his protective hand over his brother," he added. "If his brother is tried, then people will see that laws are applied to everyone. If not, the Revolutionary Guard must pull back. Either way, Rouhani will emerge from the affair stronger than ever."