Fresh from their Champions League victory in Milan, Real Madrid returned to Spain where the festivities commenced immediately. They celebrated their record 11th top European title with their fans in the Plaza de Cibeles. 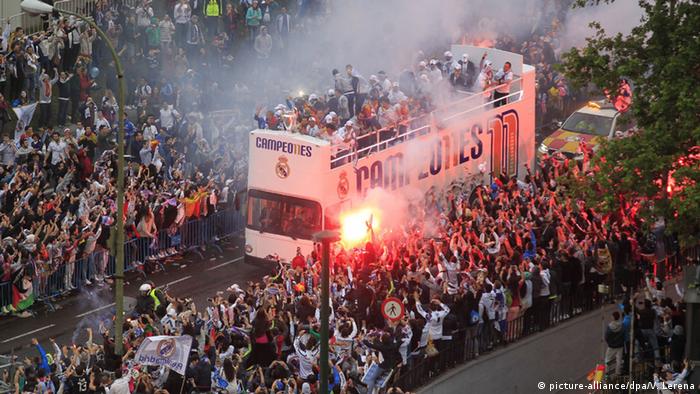 Though it was raining in Madrid, tens of thousands of fans greeted Real Madrid players when the Champions League winners arrived home early on Sunday.

The players arrived in Madrid at about 6 a.m. local time (0400 UTC/GMT) on Sunday the morning after beating city rivals Atletico Madrid on penalties in Milan, Italy. The players then boarded a bus to head straight to Plaza de Cibeles, the traditional Real Madrid celebration spot. German international Toni Kroos snapped a photo with the jubilant supporters behind him along the way.

Players brought their Champions League trophy along for the bus ride, constantly showing it to their onlooking supporters. Gareth Bale put the trophy into perspective as the bus made its way to the Plaza de Cibeles.

On the side of the bus read "CAMPEO11ES," celebrating Real Madrid's record 11th win of either the Champions League or its predecessor, the European Cup, using 11 to resemble a upper-case "N." They are now four titles ahead of second place AC Milan and have more than recent Champions League rivals Bayern Munich and Barcelona combined, both of whom have five.

Videos popped up all over social media as players tried to preserve the celebration. Karim Benzema may have filmed the best one, providing his followers with multiple perspectives of the festivities before providing his trademark salute.

The celebrations finally reached the square, where goal scorer Sergio Ramos stood behind the Cybele fountain with the Champions League trophy in his hands.

They may share a city but Saturday’s Champions League finalists don’t have much in common. DW’s Matt Pearson says Real's win was an all-too-familiar triumph of deep pockets and short-termism over teamwork and stability. (28.05.2016)