Trade barriers between most countries in the Asia Pacific will be lowered significantly from January 1 as the world's largest free trading bloc opens for business.

By comparison, the United States-Mexico-Canada trade agreement (USMCA) covers 28% of world trade, while the European Union's Single Market is a distant third at nearly 18%.

"RCEP is a shallow agreement, but a sizeable one," economist Rolf Langhammer told DW, as it mostly covers manufacturing. "But it will give Asia the chance to catch up with the huge intra-regional trade that EU countries currently enjoy."

Under RCEP, around 90% of trade tariffs within the bloc will eventually be eliminated. Inter-regional trade, already worth $2.3 trillion in 2019, will receive a major boost, just as countries in the Asia Pacific try to recover from the COVID-19 pandemic.

RCEP will also set common rules around trade, intellectual property, e-commerce and competition in a move the United Nations said would raise the Asia-Pacific region's position as a "center of gravity" for global commerce.

In a recent analysis of the deal, the UN's trade department UNCTAD said RCEP would boost inter-regional trade by $42 billion.

China set to benefit most

Langhammer, who is a former vice president of the Kiel Institute for the World Economy (ifw-Kiel), said the advantages of RCEP would be uneven among the 15 member signatories. He said he expects China ― by far the region's largest economy ― to benefit the most, along with Japan and South Korea.

"The agreement is tailored to China's interests, both on the import and export side," he told DW. "RCEP will give China tariff-free access to key export markets like Japan and South Korea, while at the same time, securing access to import sourcing markets [ASEAN countries] for its huge manufacturing supply chain."

China currently has no bilateral agreement with Japan and only a limited deal with South Korea ― its third and fifth largest trading partners, respectively.

India decided against joining the trade bloc during late-stage negotiations in 2019 out of concern that it would be flooded with cheap imports from China.

While the big Asian economies will enjoy most of the spoils, RCEP may leave smaller countries within ASEAN at a disadvantage, Langhammer warned, as the trade deal doesn't cover their major industries.

"Many of China's neighbors rely on rice shipments or the export of cheap labor, but neither services or agriculture are covered by this trade deal," he said.

The least developed countries in Asia ― Cambodia, Laos, Myanmar ― currently benefit from inter-ASEAN trade, which could be "eroded" by RCEP trade, Langhammer said. For example, the poorer nations' exports to Singapore could be usurped by Japan, which now has the same trade access to all ASEAN countries.

The smaller ASEAN countries may also lose some of their benefits from trade preference programs that allow them to export tariff-free products outside of ASEAN, including South Korea and Japan.

The lower-income countries should, however, gain from so-called trade diversion, where commerce is redirected from non-RCEP members. UNCTAD said trade diversion would be "magnified" as integration between RCEP goes further in the next decade.

All the same, those economic gains "will take a long time to materialize," according to Louis Kuijs, head of Asia economics at the think-tank Oxford Economics, as it will take 20 years to fully eliminate tariffs and restrictions set down in RCEP. 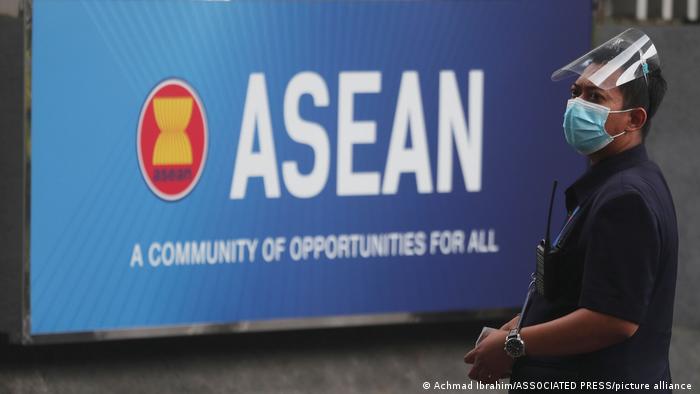 RCEP is a new free trade deal between the 10 nations of the Association of Southeast Asian Nations (ASEAN) bloc and China, Japan and South Korea

Kuijs sees the reduction in red tape as a major boon. After all, trade within the region is currently subject to at least five so-called rules of origin requirements ― criteria to determine the national origin of a product.

"All signatories could potentially benefit from the 'common rules of origin,' which implies that members will require only one certificate of origin for trading within the bloc," he told DW.

US absence will have consequences

In its analysis of RCEP, think tank the Atlantic Council warned that the lack of participation by the United States "allows Beijing to solidify its role as driver of economic growth in the region."

Washington had planned to try to contain China's economic influence by joining another proposed trade deal known as the Trans-Pacific Partnership (TPP). However, US former-President Donald Trump pulled out of the agreement in 2017.

TPP's remaining members then created a third agreement, the Comprehensive and Progressive Agreement for Trans-Pacific Partnership (CPTPP), which in September China applied to join. Beijing's membership in CPTPP is far from certain, but its chances will be boosted if China can comply with the regulatory requirements of a shallow trade deal like RCEP.

The Atlantic Council said if RCEP does help Beijing to seal future trade agreements, "China's seat at the table and the US's lack thereof will be even more consequential."

China's economy: What next for the Asian powerhouse?

China's post-COVID recovery has been hurt by Beijing's crackdown on real estate and tech giants. Strong exports have, until now, saved the economy but what happens when global demand for Chinese goods slows?

Where is the US-China relationship headed in 2022?

The US and China are increasingly locked in a serious economic and geopolitical competition, and the rivalry looks set to escalate next year.

Will Russia's new push in ASEAN be another failure?

Moscow is looking to play a stronger role in the Indo-Pacific area as the current epicenter of geopolitics is seeing an increasing push-and-pull from Washington and Beijing.

One of the EU's tests for 2022 will be convincing Southeast Asian countries that it can be a more rounded partner and not just a financier of ASEAN projects.

The two countries will join ASEAN nations, along with China, South Korea, and Japan. The pact will cover 30% of the world's population and 53% of last year's exports.