She grew up with 2Pac and MTV. Now Ebow is making a name for herself as a rapper. Her lyrics are driven by feelings, and in DW's Melting Pop series, she says she wants to tackle racism by doing something positive.

DW: When did you first get interested in hip hop?

Ebow: I got interested when I was a kid because my aunt used to babysit me a lot. Back then, she was about as old as I am now. On TV there was usually just R&B and hip hop - and the MTV charts were full of it. So as a young girl I sat in front of the TV all day and actually just wanted to watch kids' shows, but my aunt said, "No we're going to watch MTV." That was a good decision. I can even remember the videos. When I was four, I watched "Bills Bills Bills" by Destiny's Child. And at some point I started writing my own songs.

What do you like most about the hip hop genre, as far as the music and lyrics go?

All my cousins used to listen to hip hop, 2Pac and stuff, but didn't understand a word of English. But I'm not just talking about my cousins. There are lots of people with immigration backgrounds who feel understood by hip hop. It's music that gives itself to the people through its presentation and aura and clearly says, "Hey, we understand your problems." That's really remarkable and I don't think you can say that about very many genres - especially because it's not about singing. It's not like a rapper sings and then you say, "Your voice really touched me." It's really all the energy that's in it.

What's important to you in your texts?

It's important to me how I perceive certain things, how things develop around me in a room, and what people think about something. I try to put myself in other people's shoes. I try to see things from other perspectives and then write about that. I put a lot of feelings into it. I couldn't write a text about something that doesn't produce any feelings in me. Although I never write texts about things I hate - even though hate is a legitimate feeling. But music is so important to me that I don't want to approach with something as negative as hate, though many things upset me. But then I'd rather take the time to calm down and think about why that is. And if you think about the fact that hate often arises out of fear, then you have to ask where the fear comes from. And then you write the text from a completely different perspective. 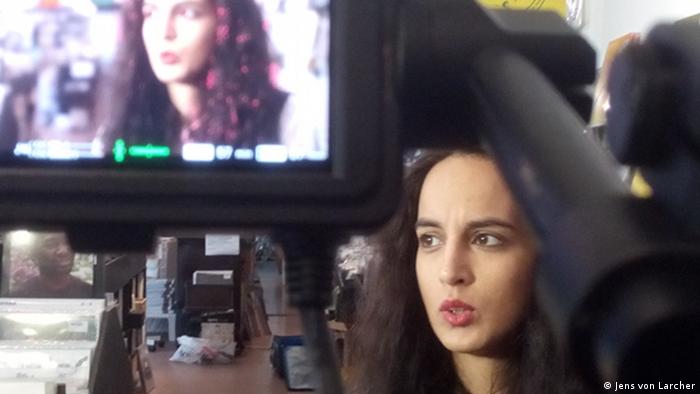 You entered the male-dominated domain of hip hop as a German-Turkish woman. Were you confronted with lots of clichés and prejudices?

I've often been asked "You're a woman in hip hop. Have you had any problems?" And my answer is: No. All the guys I know support me. All the rappers in Munich are really cool guys. And all the other rappers I meet think it's cool. I've never heard a hip hopper say, "You're a woman, you can't do that." I think that comes from the 90s or 80s. Sure, there are people who think that, but fortunately I've never met any of those idiots.

An emancipated woman with Turkish roots - many in German think that's a self-contradiction. Why's that?

I think that's the image the media portrays, so that's why people here think that. What are Turkish women like? Do they sit at home all day? No, even just in Munich where I'm from, there's Ayzit Bostan [Eds: A fashion designer with Turkish roots], who's amazing in her field. There are lots of other women with international backgrounds and strong women that make me think, "Hey, chapeau, what you're doing is awesome." That's why I think that if the focus were put more on these people, rather than on honor killings or other stuff, then people would have a different image of Turkish women.

Have you dealt with prejudices?

Depends. Not that often, and when I do I don't take them seriously. When someone asks me a stupid question, then I laugh it off. I mean, things like "Do you eat pork?", "Does your mother wear a headscarf?" and stuff - at some point you just ignore it.

How big of an influence does Turkish music have on your style?

As a small child, I listened to lots of Turkish music - Turkish pop. And my parents organized a lot of Turkish concerts. Then I kind of rejected Turkish music and, thanks to my aunt, found my way to hip hop and thought that was all so much cooler. Then over time I started to pay attention to the old Turkish things. I often go to the record store and buy psychedelic Turkish albums because I think they're awesome. Barış Manço, for example. There are so many musicians from that time that are so good. And that's how this connection came about, and I said, "Ok, I'd somehow like to adopt that sound."

Have you ever experienced racism?

Yes, definitely, as a child and also when I got older. I think it's terrible that Germany is still so reduced to Hitler and stuff. There's racism everywhere here. In Turkey, there are also right-wing extremists and in Sri Lanka, the Tamils are repressed. You can't always say, "The Germans have always been like that." That's bullshit. When you consider how many people attend the anti-PEGIDA demonstrations - even though I think PEGIDA [Eds: PEGIDA is an anti-foreigner organization in Germany] is over-estimated. I think that's remarkable.

How important is it to you to take a stand against racism and prejudices and do something about them?

I think it's important to take a stand. To me it's more important to be in support of something rather that to just be against something, like PEGIDA. I'd rather invest my time in a group that, for example, does something for the refugees. I want to do something positive.

Beyond the name Boateng, rapper BTNG fights for recognition

Soccer stars Jerome and Kevin-Prince Boateng have a brother: George Boateng, aka BTNG. In this DW interview, the rapper talks about his music, his childhood, and what it was like to be an African-German kid in Berlin. (02.11.2015)

How German rap found its 'flow'

German hip hop was a poser in the 1980s and copied US artists. Leading German rap journalist Falk Schacht explains how rappers in Germany found their own voice and why rap know now boundaries. (17.08.2015)

German rappers side with asylum-seekers

Europeans are wealthy, but not willing to share with refugees, carp German rappers. Pro-refugee rap is a growing niche genre that may not keep boats from sinking in the Mediterranean - but is still stirring things up. (14.08.2015)