German rappers side with asylum-seekers

Europeans are wealthy, but not willing to share with refugees, carp German rappers. Pro-refugee rap is a growing niche genre that may not keep boats from sinking in the Mediterranean - but is still stirring things up. 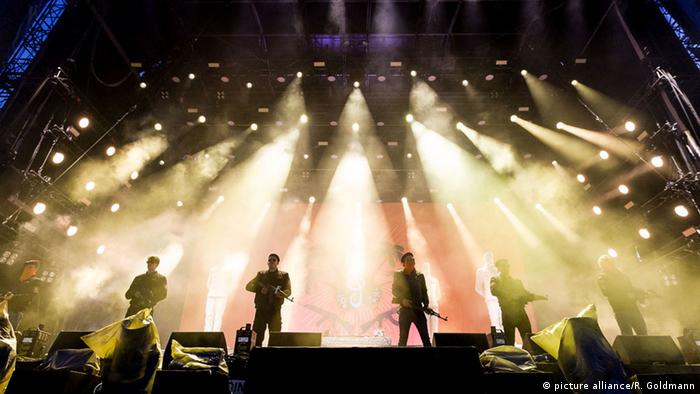 "Do you think the refugees got onto party boats with dreams of selling drugs in park?" raps Tarek in a mixture of rage and bewilderment. The musician doesn't take kindly to anti-refugee sentiments.

He is part of Berlin-based rap group K.I.Z., which has recently released its fifth album, "Hurray the World Is Doomed," to public and critical acclaim. It's an album that takes a decided stand for refugees heading to Germany.

In a song entitled "What Would Manny Marc Do?" the group raps in first-person about the harrowing experiences of an asylum-seeker traveling across the sea and arriving at his destination, only to fear for his life:

Dad died in war, my mom and sister drowned at sea
The smuggler was sick of their thirsty cries
I'd be next if I didn't stop crying
I haven't cried since then, but still see him in my dreams
Sharing my bed with three strangers, and don't know where I am
There are no more soldiers, but we still need protection
How am I supposed to learn your language when I hear the same words every day:
'Piss off to where you come from!'

These lines come at a time of rising protests against the massive influx of asylum-seekers that have been seeking refuge in Germany in recent weeks. Since late last year, cases of arson targeting makeshift refugee accommodations have been on the rise.

In the first half of 2015, there were more attacks than in all of 2014, according to Germany's Interior Ministry. Some observers even worry that Germany may be sliding back into a xenophobic climate similar to the 1990s which culminated in several racially motivated murders. But others are confident that Germany is evolving into a different country. 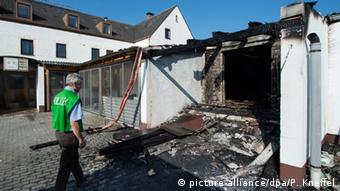 This house in Bavaria was to become a refugee home, but was set on fire in July

"If I compare this situation to the 1990s, then I get the feeling that most Germans are accepting of refugees," says Tobias Rapp, a music journalist at "Der Spiegel," adding that a small but vocal minority is responsible for the anti-refugee sentiments that have been making headlines.

And such attitudes have not been left unchallenged - in the rap scene, of all places.

Rappers show no mercy with xenophobes

Not only have K.I.Z. taken a stand, but also Berlin-based rapper duo Zugezogen Maskulin. In the song "Oranienplatz," named after the central square in Berlin's bohemian district of Kreuzberg, they allude to a makeshift refugee camp that was erected there in 2013. Over a growling instrumental accentuating their rage, the two rail against the clearing of the camp a year later and the societal apathy that accompanied it. They poignantly contrast first-world problems against those faced by the refugees:

You can tan in the desert
Pipelines, bands of mercenaries, shots fired from helicopters
Should I buy shoes from Nike or Adidas?
Such questions torment me while you enjoy a pleasant boat journey.

Zugezogen Maskulin's climaxes their criticism of European apathy in the sarcastic chorus, declaring that "We are far too wealthy to share anything with you."

While K.I.Z. and Zugezogen Maskulin channel their support for refugees into bursts of rage and irony, rap groups like Antilopen Gang go a step further.

They told Cologne's daily newspaper "Kölner Stadtanzeiger" what motivates them to make music: "We want people to be able to move freely all over the world, regardless where they're from," adding that this must apply particularly to those fleeing poverty and war.

This conviction becomes most apparent on their song "Beate Zschäpe Listens to U2," which is named after the primary suspect in the ongoing trial against a neo-Nazi group believed to be responsible for numerous racially motivated murders between 2000 and 2007. In the song, they take an uncompromising swipe at wide parts of German society for perpetuating or trivializing anti-refugee sentiments.

Without mincing words, Antilopen Gang diss those denouncing asylum-seekers as criminals who threaten the national way of life. The song's chorus makes explicit reference to the torching of asylum-seekers' homes, and then cynically praises Germany for being such a "thorough" and "hard-working" country.

Yet the most astonishing contribution originates from another Berlin-based rapper by the name of Matondo. The musician, whose Congolese parents fled to Germany in the 1990s, began making songs about social issues when he was just a teen. In his song "Nobody Is Illegal," he responds explicitly to anti-refugee prejudices.

Matondo urges listeners to feel compassion for the asylum-seekers arriving in Germany and demands that they be granted the right to work. Like a demonstration chant, he declares that "Nobody is illegal" and calls for Europe to open its borders and grant right of residence to all those fleeing persecution and war.

Rappers to the rescue?

Such socially conscious rap brings German rap back to its roots, after a period of focusing on glorified consumerism and an archaic form of masculinity, or on reveling in light-hearted wordplay and humor. Bushido featuring Shindy on "Panamera Flow" and McFitti with "30 Grad" spring to mind. 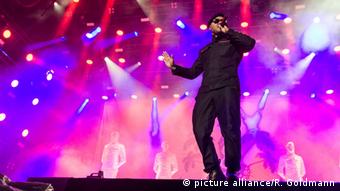 The K.I.Z. quartet has been rapping for 15 years

"When German rap music started in the 1990s, it talked about political issues and about feeling ostracized from society," recalls Tobias Rapp. Groups like Freundeskreis, for example, did not shy away from addressing controversial issues like the Chernobyl nuclear disaster and the 1973 CIA coup in Chile. Now, it seems, some artists are rediscovering the critical, concerned foundation of German rap.

Marcus Staiger, who over the past years has played a pivotal role in popularizing German-language hip hop as a music journalist and founder of now-defunct label Royal Bunker, concurs. But he also points out that "there are still too few groups addressing the refugee issue."

Staiger says that hip hop is particularly apt at describing social injustices - but he is also wary of musicians trying to offer quick solutions.

While music cannot replace practical solutions, at the very least it's making a few people rethink the current refugee debate.

Berlin drops its cultural condom with music for the masses

As xenophobia rears up again across Europe and the world, DW's Stuart Braun hopes it might be different in the German capital - where the soundtrack befits the city's 190 nationalities. (12.03.2015)

Rock am Ring: 3 German non-rock acts you should know

Sure, you know Kraftklub and Die Toten Hosen. But here are a few German hip hop acts they're about to share the stage with. If they're not on your playlist yet, they should be, says DW's Kate Müser. (02.06.2015)