Racism is becoming ever more common in Mongolia, where extreme, right-wing nationalist groups target especially Chinese citizens. They are not afraid of resorting to violence. 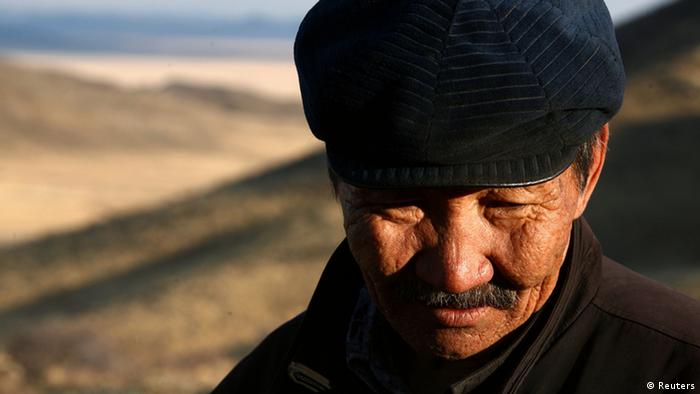 Tserenchunt, 25, and two of his friends are all dressed in black. He is wearing tinted sunglasses and has the tooth of a large animal around his neck. The three young men stand out among the pedestrians dressed in colorful clothes in the center of the Mongolian capital city, Ulan Bator. They met there in front of a school to distribute fliers.

"We want to save Mongolians from the threat of foreigners," Tserenchunt says.

The three are members of the ultra nationalist organization "Dayar Mongol." Such nationalist groups have seen a rise in popularity in recent years. They use Nazi symbols - the white swastika on red and the Hitler salute and worship Hitler.

Their hate is directed against foreigners living in Mongolia. Tserenchunt believes there is a Chinese and Korean conspiracy against Mongolia. 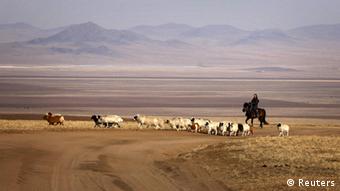 Many Mongolians are nomadic herders

"The Koreans flood us with their soap operas. They use them to make Korea seem attractive, so that our men will go over there to work. They try to convince our women that Korean men are good catches," he says.

He is also convinced that the Chinese are sent to the country by their government to destroy Mongolia.

"They want to rot us pure blooded Mongolians out. We have been enemies from the very beginning. That won't change."

Many Mongolians fear the economic and political domination of China.

But it isn't only the followers of "Dayar Mongol" who believe they must protect themselves from foreign influence. Prejudices are not uncommon among the country's 2.8 citizens. Foreign construction companies that have recently started investing in Mongolia are received with great distrust.

"The foreigners are stealing our natural resources and nothing will remains for us." Sentences like that are common. Many foreigners in Ulan Bator have reported being insulted and in some cases assaulted, especially in bars or clubs, where alcohol is involved.

But the far-right extremists take a step further, even. They vandalize stores and equipment belonging to foreign construction companies and sometimes even attack people. Members of "Dayar Mongol" made headlines for cutting the hair of women who meet with foreign men. Tserenchunt uses a harsh racist ideology to justify such actions.

"Our greatest threat is blood-mixing. Our women going out with foreign men for their money - that is unacceptable. There is a saying that goes, 'if your women are impure, your country is done for.'" 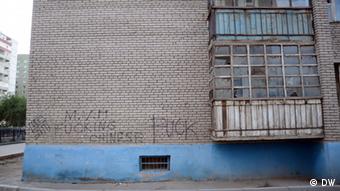 Chinese and Koreans are increasingly unwelcome in Mongolia

The nationalists don't even shudder at the thought of murder. Years ago, the group's leader was sentenced to death for murder. It is the same story with other radical groups. The leader of the neo-Nazi group "Blue Mongolia" was also sentenced to death for racially motivated murder a few years ago. He had killed his daughter's boyfriend because he studied in China.

Bayaraa, who wishes not to uses his real name, is the owner of a Chinese restaurant in Ulan Bator. He has on occasion had the displeasure of crossing paths with neo-Nazis.

"They used to threaten us. They vandalized the store and broke what they could. They don't do that anymore. But sometimes they come in and demand that we pay 'protection money.' When we refuse to do so, they threaten to go to the health department and tell them that our restaurant is unhygienic," he says, adding, "But we are not afraid of inspections because everything he is according to regulation."

Out of fear of a return of attacks, Bayaraa no longer hangs up signs written in Chinese characters, like many Chinese restaurants in Ulan Bator.

Bayaraa is in his mid-30s. He is wearing a yellow shirt and his hair is a typical-Chinese brush cut. The sad irony of his story is that he himself is Mongolian. He is from Inner Mongolia, which is part of China. He grew up in a traditional yurt. "When I was a child, we raised livestock. I didn't learn Chinese until I was 18, when I joined the military."

As Mongolia booms, Germany wants a slice of the cake

Mongolian President Tsakhia Elbegdorj is in Germany. He has met his counterpart Joachim Gauck and Chancellor Angela Merkel. The two countries are keen to expand their cooperation. (29.03.2012)

The two Hus and the Tibet conundrum

Neither repression nor investments from Beijing can turn Tibetans into patriotic Chinese citizens. And the unrest which continues to flare up has an effect on party politics. (08.02.2012)

While the funeral of a villager who died in police custody took place, people in Wukan have continued to protest against oppression and expropriation. Police cordons there have left the village in a state of martial law. (16.12.2011)