It was a marriage of love, celebrated just two years after the end of World War II, on November 20, 1947. Queen Elizabeth and Prince Philip now mark their platinum wedding anniversary with a small family gathering.

She said she fell in love with him when she was 13 years old, while visiting the Royal Naval College with her father King George IV and his sister Margaret in 1939, where she spent time with the then 18-year-old Prince Philip, a second cousin once removed. The Sunday Pictorial, predecessor of the British tabloid Sunday Mirror, described the young man as "a blond Greek Apollo."

"Lilibeth couldn't take her eyes off him," said Marion Crawford, Elizabeth's governess at the time. Philip had also felt the sparks; the shy Elizabeth had left a strong impression on him.

They kept contact during World War II. In 1946, Philip proposed to Elizabeth and she immediately accepted. Her parents, however, didn't approve, as they felt he was an inappropriate match for the future Queen of England. Philip, Prince of Denmark and Greece, also had German roots. 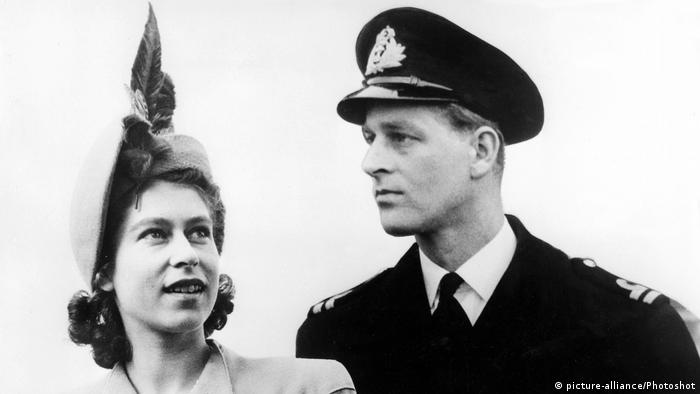 However, Elizabeth insisted on marrying her dashing lieutenant, who had served for the British army during the war. Philip abandoned his Greek and Danish titles and they married on November 20, 1947 in London's Westminster Abbey.

Even though the aftermath of the war could still be felt throughout the country, Elizabeth and Philip celebrated a dream wedding that aimed to raise the spirits of the nation.

Her ivory-white dress was embroidered with 10,000 beads; the Queen had to collect ration coupons to pay for it though. The four-tiered, 2.7-meter-high (nine-foot-high) wedding cake was also impressive.  In 2013, a collector acquired at an auction a preserved slice of that cake for 700 euros. 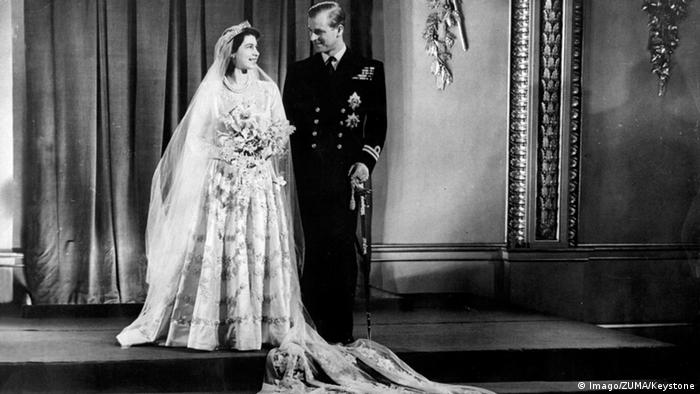 Luxury to forget the shortages: Queen Elizabeth and Prince Philip's wedding on November 20, 1947

After Elizabeth's coronation on June 2, 1953, Philip accompanied his Queen around the world. Some of his diplomatic gaffes became legendary. While on an official visit to China, he warned British exchange students, "If you stay here much longer you'll all be slitty–eyed." Accepting a gift from a woman during a Kenya visit, he asked, "You are a woman, aren't you?" Publicly at least, the Queen has always appeared unperturbed by his controversial comments.

Read more:5 things you probably never would have guessed were presents to Queen Elizabeth II

It wasn't easy for Philip to stand in his wife's shadow. "I am the only man in the country not allowed to give his name to his children. I'm nothing but a bloody amoeba," he once complained.

While three of their four children's unions ended in divorce, their marriage has remained strong. When British tabloids suggested Philip had cheated on the Queen, he wondered how that could have possibly happened, being accompanied day and night by security guards ever since their wedding. 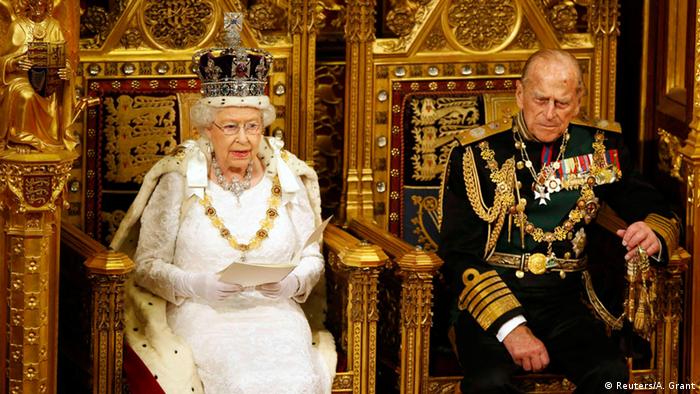 They remain the stable pillars of British monarchy: Queen Elizabeth and Prince Philip

"He has, quite simply, been my strength and stay all these years, and I, and his whole family, and this and many other countries, owe him a debt greater than he would ever claim, or we shall ever know," said the Queen during her speech for their golden wedding anniversary in 1997.

Prince Philip, now 96, has retired from active public life in August; the Queen, 91 years old, also prefers to keep things quiet. While royal couple's silver, golden and diamond wedding anniversaries led to grand celebrations, this year's platinum anniversary will be underlined with a family get-together.  Westminster Abbey will however mark the occasion with a three-hour bell concert.

Another royal baby! Prince William and his wife Catherine, the Duchess of Cambridge, are expecting their third child. While the news is bound to surprise royal fans, the queen is said to be "delighted." (04.09.2017)

It was the UK's dream wedding of the postwar period — of particular significance, given the prince's German heritage. On November 20, Queen Elizabeth II and Prince Philip celebrate 70 years of marriage. (20.11.2017)

Britain has held its first state funeral since 1965, bidding farewell to Queen Elizabeth II after 70 years on the throne. She was laid to rest with her husband, parents and younger sister.

After the pomp and ceremony, Britain's Queen Elizabeth to get private burial 15.09.2022

The palace revealed more details of the plan for the queen's state funeral service in Westminster Abbey. Meanwhile, thousands queued for many hours to file past the queen's coffin.

Almost all of the British royal family's funeral services are held at the chapel in Windsor Castle, where Queen Elizabeth II will be interred.