Rights organization Amnesty International has accused Qatar of promising little and delivering less in terms of labor reforms ahead of the 2022 World Cup. More than a million migrants are working in construction. 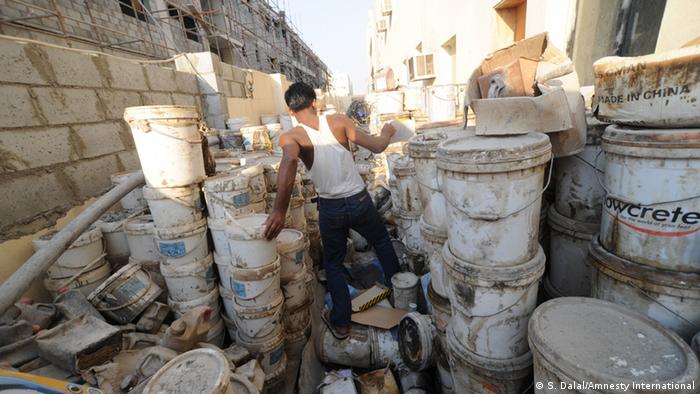 In a report published Thursday, Amnesty International has said Qatar has failed to deliver on reforms for its migrant workers, a year after the Gulf nation announced reform plans.

In its new briefing paper, Amnesty criticized the host nation for the 2022 World Cup for making no substantive changes on key labor issues affecting the guest workers building its highways, hotels, stadiums and skyscrapers.

The London-based rights group has produced a series of in-depth reports detailing working conditions of many of the 1.5 million migrant laborers engaged in the huge construction boom.

Amnesty said “little has changed in law, policy and practice” since the government promised limited reforms 12 months ago. It said that of nine key issues identified by Amnesty, limited progress had been made on just five.

Central to the issues is the "kafala" employee sponsorship system which ties expatriate workers to a single employer. In May 2014 Qatar outlined plans for legislation which could end the system and allow workers to obtain exit visas without having to secure their employers' consent.

Amnesty accused Qatar of failing migrant workers and “promising little and delivering less” in terms of meaningful reform. The report said that changes which had been promised, such as the introduction of electronic wage transfers to ensure they are paid on time, were still being implemented. Many migrants still complained of late or non-payment, it said.

“The reality is that more than a year and a half after Amnesty highlighted rampant exploitation of migrants, little has been done to address the root causes of this abuse. We are one year closer to Qatar's 2022 World Cup – time for changes to be implemented is running out,” said Amnesty's gulf migrant rights researcher Mustafa Qadri.

World Cup organizers FIFA welcomed the report and said it would continue to press Qatar to enact reforms: "FIFA has repeatedly urged publicly and with the highest authorities in Qatar that fair working conditions for all workers in Qatar are imperative," it said.

FIFA came under pressure from sponsors Adidas, Coca-Cola and Visa on Wednesday to push Qatar to deliver reform.

"We continue to be troubled by the reports coming out of Qatar related to the World Cup and migrant worker conditions," Visa said in a statement. "We have expressed our grave concern to FIFA, and urge them to take all necessary actions to work with the appropriate authorities and organizations to remedy this situation and ensure the health and safety of all involved."

Adidas, the World Cup ball provider since 1970, said it remains in "constant dialogue" with FIFA. "There have been significant improvements and these efforts are ongoing, but everyone recognizes that more needs to be done in a collective effort with all stakeholders involved," Adidas said in a statement.