Russian President Vladimir Putin has pledged to find the perpetrators behind the fatal shooting of outspoken opposition politician Boris Nemtsov. World leaders have called for a thorough and transparent investigation. 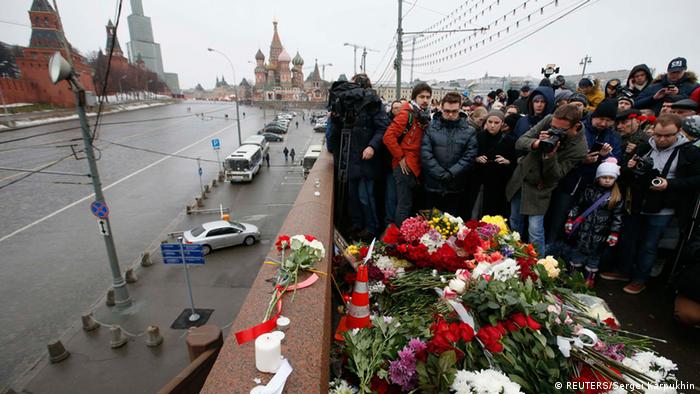 As world leaders condemned the assassination of Boris Nemtsov on Saturday, Russian President Vladimir Putin said he would do everything possible to bring to justice the gunmen responsible for the attack.

"Everything will be done so that the organizers and perpetrators of a vile and cynical murder get the punishment they deserve," Putin said in a telegram to Dina Eydman, the 86-year-old mother of the slain politician.

Police said Nemtsov, 55, was walking with a Ukrainian woman across the Bolshoi Moskvoretsky bridge in central Moscow late on Friday when he was fatally shot four times in the back by unknown assailants driving a white car. A pile of flowers rested Saturday in the spot where he died.

Putin said Nemtsov, who served as deputy prime minister under Boris Yeltsin's presidency in the 1990s, had left his mark on Russia's history, politics and public life.

"He worked in significant posts during a difficult transitional period for our country," Putin said. "He always directly and honestly announced his position, stood up for his point of view."

Nemtsov was a scathing critic of Putin's leadership, and frequently spoke out against corruption in the government, Russia's annexation of Crimea and involvement in the conflict in eastern Ukraine. Just hours before his death, Nemtsov had called on Russians to attend an opposition rally on Sunday against the Kremlin's policy on Ukraine.

Instead of that rally, organizers have decided to hold a memorial march through the center of Moscow. Russian authorities gave permission for 50,000 people to take part.

The murder of the former Russian deputy prime minister is one of the highest-profile killings during Putin's 15-year rule, and prompted widespread calls for a thorough investigation.

German Chancellor Angela Merkel said she was "shocked by the devious murder" and called on the Russian president to ensure it was "investigated and the perpetrators brought to justice."

French President Francois Hollande described Nemtsov as "a courageous and tireless defender of democracy who was committed to the fight against corruption."

Earlier on Saturday, Putin said he would personally oversee a probe into the murder, which he said smacked of a "contract killing and is entirely provocative in nature."

The investigative committee reporting to Putin on the case said they were pursuing several lines of inquiry, but were treating the killing as an attempt to destabilize Russia's political landscape. In a statement, the body also said it was looking at whether the murder was carried out by Islamist radicals or parties involved in the conflict in eastern Ukraine who wanted to damage Russia.

The committee did not mention a possibility raised by some of Nemtsov's supporters - that he was killed for being one of Putin's more vocal political foes.

Nemtsov began his political career as the governor of Nizhny Novgorod in central Russia and rose to the position of deputy prime minister in the 1990s under Yeltsin, the country's first democratically elected president. Nemtsov became a part of the opposition after Putin came to power in 2000.

Putin critic Boris Nemtsov has been murdered. It's a troubling prospect that this crime - like so many other politically motivated acts - will never be fully solved, writes DW's Ingo Mannteufel. (28.02.2015)

Belarus opposition advisor Franak Viačorka tells DW’s Brent Goff on “The Day” that people in Belarus are afraid of being dragged into Putin’s war on Ukraine, which he says most people oppose. Viačorka predicts Russia will continue to get weaker.