A brawl broke out in South Africa's parliament as President Jacob Zuma tried to give his annual state of the nation address. Members of the Economic Freedom Fighters were ejected after heckling the president.

South Africa: lawmakers protest against the president during his annual speach

South African president Jacob Zuma deployed some 440 troops outside parliament in Cape Town on Thursday as he delivered his annual state of the nation address. Few were expecting that the violence would erupt inside the chamber.

Lawmakers from South Africa's radical leftist Economic Freedom Fighters (EFF) brawled with security forces as they were ejected from the parliament building for interrupting and heckling Zuma during his speech for almost an hour.

"We have been patient with you, we have been trying to give you an opportunity to express yourselves but... it is being abused," Speaker Baleka Mbete told EFF members as they were thrown out of the chamber. "Your conduct has failed you. You are irrational, impatient, partisan."

Their expulsion prompted lawmakers from the largest opposition party, the Democratic Alliance, to walk out in protest. As they walked out, they called out Zuma for being unqualified to hold office and questioned the deployment of troops by the parliament.

"Finally," Zuma said, laughing and appearing unbothered by the fighting that had unfolded before him. He then started his annual address. 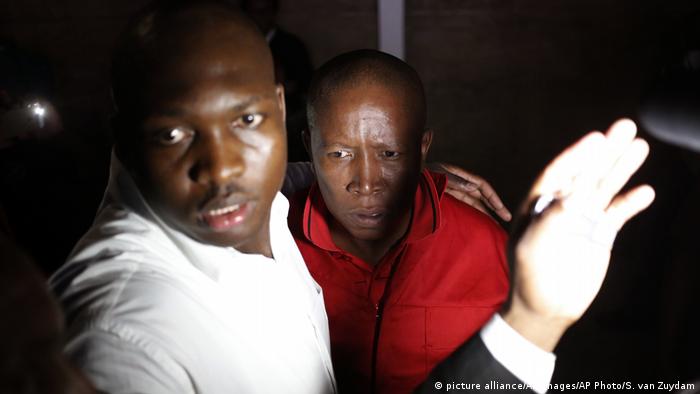 EFF leader Julius Malema, once a protege of Zuma's, has been one of the president's fiercest critics.

"Twenty-two years into our democracy, the majority of black people are still economically disempowered," Zuma said during one of the quieter moments of the session. He said that the under-pressure ANC government would "utilize the maximum strategic levers" to empower black citizens, be it legislation, licencing, budgeting or procurement.

"The economy is still not growing fast enough to create jobs we need," Zuma conceded, albeit predicting a 1.3-percent year-on-year bump in GDP.

Zuma saw his speech disrupted in particular by members of the EFF, clad in their traditional red workers' overalls, who repeatedly interrupted and insulted the South African president during his speech before being expelled.

The EFF has continually declared Zuma unfit for office, citing allegations of influence-peddling that have politically weakened the president.

The leader of the EFF, Julius Malema (pictured above), shouted that Zuma was "rotten to the core," while other opposition legislators vocally labeled the president a "scoundrel" and "constitutional delinquent."

Scenes outside of parliament up to that point had remained relatively peaceful despite fears the clashes could spill over between supporters from the political rival camps.

That peace was disturbed as police fired stun grenades outside of parliament as they escorted EFF members out of the building. There were no reported injuries.