German police have begun a criminal probe after 29 visitors at a private seminar center near Hamburg became intoxicated with a banned psychedelic drug. They were rushed to hospital, barely able to speak. 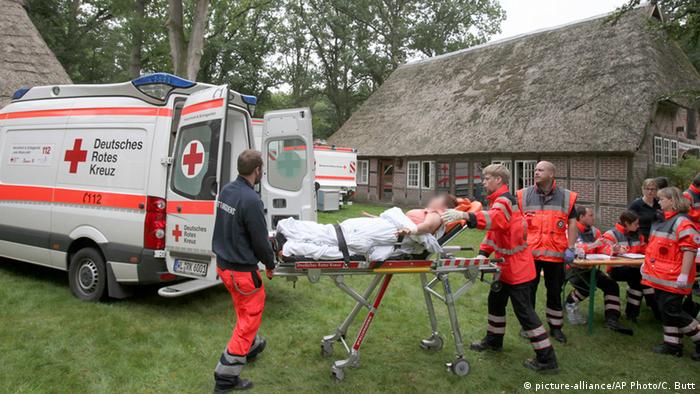 The amphetamine 2C-E or Aquarust was on Saturday given as the likely cause of Friday's mass intoxication, reportedly involving naturopaths, at Handeloh, a small town some 40 kilometers from Germany's northern metropolis of Hamburg.

Police on Saturday said they had begun investigations under Germany's anti-narcotics law on the grounds that persons had injured themselves, necessitating a medical emergency.

How the incident unfolded or whether those affected had wittingly taken the halluzinatory substance was still unclear on Saturday. Police said those intoxicated were still not fit for questioning. Laboratory tests to identify the substance were continuing.

"The questioning begins as soon as the persons are coherent and their statements are useable," said a police official quoted by the news agency DPA.

The psychedelic drug 2C-E or Aquarust was banned in Germany last year. It has an euphoric effect and, like Ecstasy and Speed, belongs to the group of synthetically-produced amphetamines.

Some 160 rescue personnel in 15 ambulances and a helicopter converged on Handeloh on Friday afternoon and rushed the 29 to various clinics in the Hamburg area.

The patients, aged between 24 and 56, were found suffering from delusions, breathing problems, racing hearts and cramps, some in life-threatening conditions, according to the public broadcaster NDR.

The news magazine "Der Spiegel" described those affected as alternative and homeopathic practitioners. NDR said doctors were also among the seminar group and suggested that participants might have taken part in a drug experiment.

Fire service spokesman Mathias Köhlbrandt told NDR that he had never experienced such as situation.

"Men and women lay with cramps in the garden and in front of the building," he said, adding they did not seem to have knowingly taken a drug.

Some were suffering delusions and even psychoses, NDR reported. Some patients were administered sedatives en route to hospital, said the emergency response physician who headed the rescue operation, Dr. Kai Rathjen.

The seminar center's propreitor Stefka Weiland said her team distanced itself from "what has occurred."

"We didn't have anything to do with it," Weiland said, adding that most of the seminar participants were from the Hamburg area.

The incident in Handeloh followed an unrelated mass infection of 110 participants at a Red Cross training center at Birkenfeld in Germany's southwestern state of Rhineland-Palatinate on Wednesday. They had eaten in its canteen.

The likely cause of the gastrointestinal outbreak was traced on Thursday to the norovirus, according to the state's health authority. Thirty patients were hospitalized but were later said to be recovering.

During the emergency, the local county administration sealed off the site.

A number of arrests have been made in an international operation to crackdown on "Darknet" websites. More than a dozen countries were involved in the raids including Germany, Britain, and France. (07.11.2014)