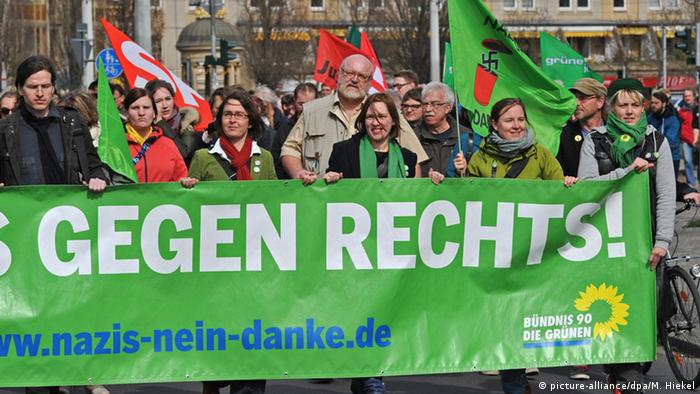 Leaders of the Social Democrats (SPD), the leftist party Die Linke and the Greens, including students and members of foreigners' councils, called for "Diversity instead of narrow-mindedness" in Dresden on Monday, where Dutch far-right leader Geert Wilders was expected to address members of the anti-Islamization group PEGIDA.

Saxony's Integration Minister Petra Köpping said earlier on Monday that people "needed to oppose" right-wing populists that PEGIDA was bringing into Dresden to propagate its anti-immigration ideas. Local Greens leader Jürgen Kasek also emphasized that civil society in Saxony would not allow people to go out in the street and "spread hate."

An administrative court in Dresden, however, prohibited anti-Pegida protesters from demonstrating within view or earshot of Wilders' appearance. Earlier on Monday, activists of the anti-Nazi union Dresden Nazifrei had requested permission to hold a rally in the city.

Judges said the Dresden Nazifrei rally was intended to hinder Pegida protesters. Dresden Nazifrei members came out on the streets hours ahead of Wilders' speech, prompting the group to tweet that a 30-minute delay in the Dutch populist's appearance was because of their overwhelming presence.

Earlier this year, nearly 20,000 anti-Pegida protesters gathered in Cologne, forcing the right-wing activists to cancel their demonstration in Germany's western city, which prides itself on its cultural diversity.