Three people have been killed and 80 injured as protests over austerity and unpaid salaries intensify. The Kurdistan Regional Government is under increasing pressure amid heightened tensions with Baghdad. 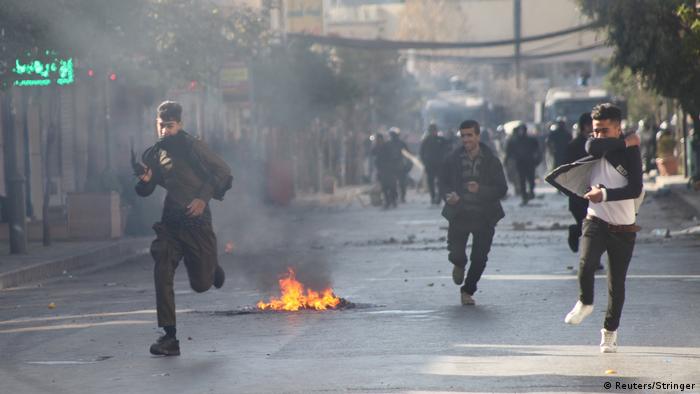 Protesters took to the streets for the second time in as many days across semi-autonomous Iraqi Kurdistan  on Tuesday to show their displeasure at austerity in the region.

Thousands of people, many of them teachers and civil servants, rallied to voice frustration at years of austerity measures and unpaid salaries. Some protesters clashed with Kurdish security forces and set fire to government buildings, while calling for the Kurdistan Regional Government (KRG) to resign.

The KRG has been in a clinch with Iraq's central government since Baghdad made cuts to the regional budget in 2014. That situation was made worse by the KRG's staging of an independence referendum on September 25, in defiance of Baghdad. A great majority of Kurds, 93 percent, endorsed the idea of breaking away from Iraq during the vote.

Although the KRG acknowledged people's "legitimate right" to demonstrate, it said that the targeting of government and party buildings was unacceptable. The government went on to warn that, if necessary, it would be forced to intervene accordingly to prevent further damage and injury. A KRG statement on the situation read: "We are concerned with the uncivil actions and the violence used today in a number of cities and towns across Kurdistan."

Iraqi Prime Minister Haider al-Abadi said that he would be forced to take action if citizens were harmed during the protests. In October, Iraqi forces took over the oil-producing city of Kirkuk in response to the independence referendum and after Kurdish Peshmerga fighters withdrew from the area.

In Sulaimaniyah, Kurdistan's second largest city and an independence movement stronghold, security forces fired into the air in an effort to disperse protesters. The Reuters news agency reported that Kurdish security forces had raided the Sulaimaniyah offices of private television station NRT Tuesday, taking it off the air. Sulaimaniyah is also the home town of former Iraqi President Jalal Talabani, a Kurd, who died in October.

Masoud Barzani stepped down as president of Iraqi Kurdistan on November 1, and the government is currently being led by his nephew, Nechirvan Barzani. New elections were scheduled to be held on November 1, but were pushed back by eight months.

Offices of Barzani's Kurdistan Democratic Party (KDP) were among those set on fire during the protests. Representatives from the Patriotic Union of Kurdistan (PUK), the KDP's coalition partners, reported that several of their offices had also been torched. And there were also reports that a number of buildings belonging to other Kurdish parties were also damaged by arson.

The unrest has not only caused concern in Baghdad, it has also worried neighboring Iran and Turkey, both of which are home to sizeable Kurdish minorities.