Protesters have tried to block a motorcade carrying North Korean dignitaries to the Olympic Games closing ceremony. The delegation is led by an ex-general thought to be behind a deadly attack on a South Korean warship. 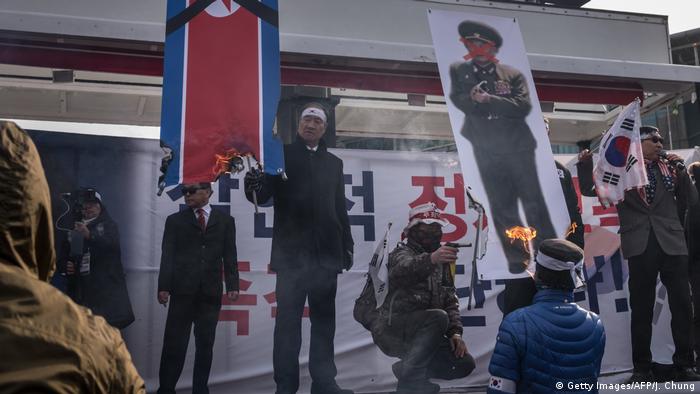 North Korean dignitaries en route to the Olympics closing ceremony in Pyeongchang were nearly mobbed by crowds of waiting protesters on Sunday.

The North's decision to send former military intelligence chief Kim Yong Chol to lead the delegation had enraged South Korean lawmakers and activists, threatening to cast a shadow over the mood of rapprochement the two Koreas have successfully created during the games.

Kim is suspected to have been behind two deadly attacks on South Korea in 2010, including the sinking of a warship in which 46 sailors lost their lives. North Korea has denied any involvement in the incident.

Around 100 lawmakers and activists staged a sit-in at Tongil Bridge near the border, anticipating it to be the route traveled by North Korea's motorcade crossing the heavily militarized border into the South on Sunday morning. The protesters were met by some 2,500 officers at the bridge. 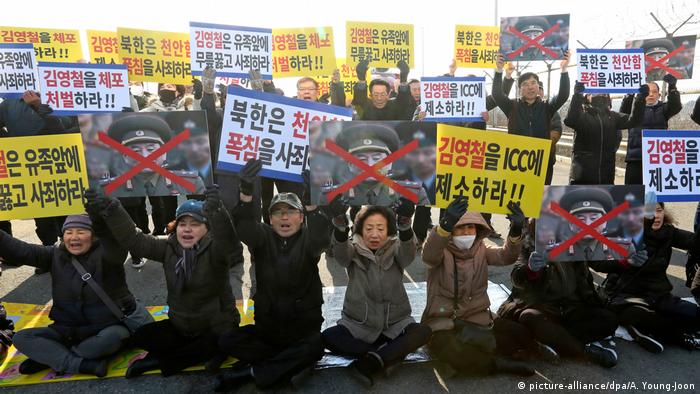 Protesters staged a sit-in on a bridge close to the demilitarized zone, calling for Kim Yong Chol's visit to be canceled

However, the North Korean motorcade instead took an alternative route and arrived at a hotel in Seoul before traveling on to Pyeongchang.

The protesters' anger was then quickly directed toward South Korean President Moon Jae-in for allowing the North Korean delegates to make the diversion.

In a statement, the Korea Liberty Party accused Moon's administration of "abuse of power and an act of treason" by rerouting the motorcade to protect it from protesters.

South Korea has heralded this year's Winter Olympics as the "Peace Games," with the hope that North Korea's participation will help ease tensions on the peninsula.

Kim Yo Jong, the sister of North Korean leader Kim Jong Un, attended the opening ceremony of the games in a historic first-ever visit to the South by a member of the ruling Kim dynasty.

Ivanka Trump, the US president's daughter and adviser, will attend Sunday's closing ceremony. However, there is no indication that she is set to meet with any of the North Korean dignitaries.