The billionaire former businessman is accused of pocketing millions of euros in EU funds along with two of his children. One of his sons said he was held involuntarily in Crimea in an effort to impede the criminal probe. 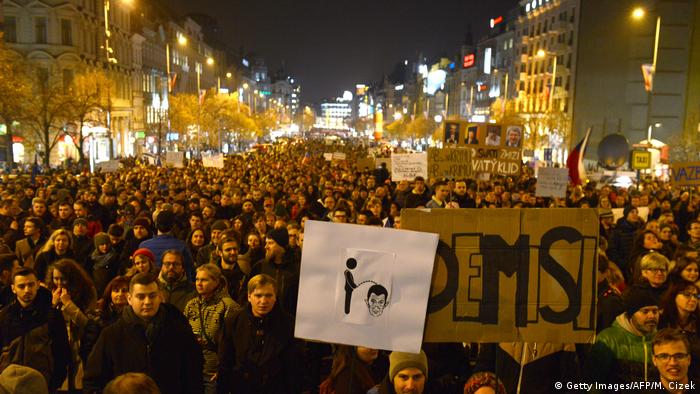 Demonstrators carried Czech and EU flags as they chanted "resignation" and "shame" in Wenceslas Square.

Public criticism against Babis intensified after his mentally-ill son told a Czech media outlet that he had been involuntarily held in Crimea in an attempt to hinder the corruption probe.

Babis dismissed that accusation and said his son had traveled from his home in Switzerland to Crimea voluntarily.

Czech prosecutors charge Babis, his son and another one of his children with pocketing some €2 million ($2.3 million) from an EU subsidy a decade ago. Babis, a billionaire, has dismissed the allegations.

Opposition parties have called for a no confidence vote in Babis' coalition government. The speaker of the lower house said the vote is likely to be held on November 23.

The leader of Babis' center-left coalition partners, the Social Democrats, said his party was considering "all options" concerning the government's future.

"The situation is serious, the information is substantial and we have to examine the most responsible approach," Jan Hamacek told Czech Television.

The anti-EU and anti-NATO SPD party however hinted that it could replace the Social Democrats in a new governing coalition that would keep Babis in power.

The upper house of parliament has called on Babis to relieve his duties until the criminal probe had ended.

Protesters are planning more rallies in Prague for Saturday.