Demonstrators ransacked the building and set fire to copies of the Koran, hours after hooded youths clashed with police in the capital Ajaccio. The French government has condemned the attacks. 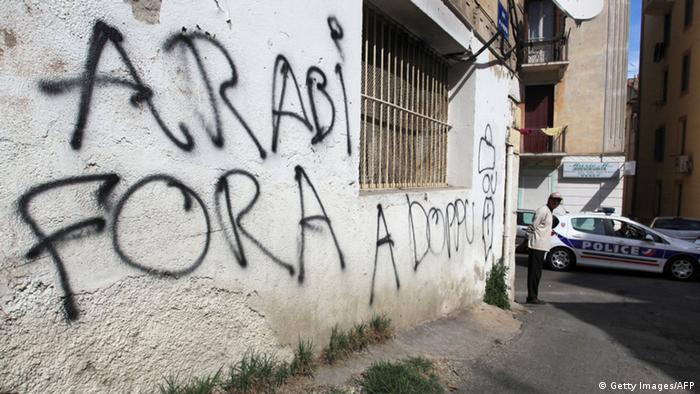 Not a first: Assailants also targeted an Islamic prayer center in Ajaccio in 2012

The Christmas Day violence came as an apparent act of retaliation after police and firefighters were "ambushed" by "several hooded youths" overnight in a low-income neighborhood of Ajaccio, the capital of the island of Corsica, authorities said.

On Friday, a Muslim prayer room was vandalized after a crowd of about 150 gathered in front of official government buildings.

A correspondent for Agence-France Presse said the group shouted slogans in Corsican meaning "Arabs get out!" and "This is our home!"

"Fifty prayer books were thrown out on the street," Lalanne said.

The vandalism took place a few hours after firefighters were set upon while responding to an emergency call late on Thursday night. Two firefighters and a police officer were injured in the earlier attack.

France's prime minister, Manuel Valls, described the violence as "intolerable aggression toward firefighters and unacceptable desecretion of a Muslim place of prayer."

French Muslim groups also condemned the violence, which they said took place "on a day of prayer for both Muslims and Christians."

France 3 reported that new police reinforcements have been added at other prayer rooms across Corsica.

The Mediterranean island is a department of France, where security continues to top the political agenda after Islamist attacks in Paris killed 130 people. The country has witnessed an increase in violence toward Muslims since the November bloodshed.

This year, Christmas falls just after the Muslim feast day commemorating the birth of the prophet Mohammed.