Nationwide protests against President Donald Trump’s ban on travelers coming into the US from seven majority-Muslim countries have continued. But customs officials have refused to release information on who was detained. 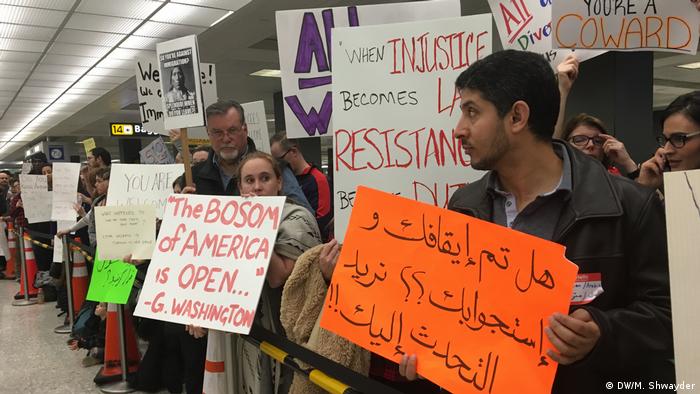 President Donald Trump's controversial travel ban brought legislators, demonstrators and lawyers out to airports across the United States for a second day on Sunday.

In the international arrivals terminal at Dulles International Airport, outside Washington, DC, worried families mingled with a handful of protesters and roughly 50 volunteer lawyers in the early afternoon. No one knew if anyone was being detained. Attorneys speaking to DW said Customs and Border Protection (CPB) officials refused to communicate with them, or let any lawyers speak with detainees. The silence continued despite an order from a federal judge saying the CBP had to give legalized US permanent residents access to a lawyer if detained.

Four congressmen from Virginia and Maryland attempted to personally negotiate with customs officials.

"This is an unfamiliar America to me," US Representative Jamie Raskin, a Democrat from Maryland, told DW. 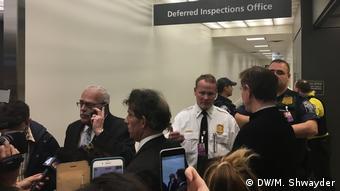 Congressman Gerry Connolly, a Democrat from Virginia, spent several minutes on the phone attempting to gather more information about someone he suspected was being held, but to no avail.

America 'a beacon of hope'

Connolly and Raskin were joined by Congressmen Don Beyer and John Delaney in the terminal, and told the press they all did not support the travel ban.

"America has always stood as a beacon of hope for those who are destitute, persecuted and suffering all around the world," Connolly said. "Yesterday was a day of shame that matches the illegal internment of Japanese Americans in WWII."

Two Trump supporters were in the crowd. One of them - a woman from Virginia - attempted to disrupt the unofficial press conference the congressmen held in the middle of the arrivals terminal. She shouted "Virginia women are for Trump!" as Delaney, a Democrat from Maryland, approached the cameras to speak.

"I can't even look that way!" Delaney said in response. "If you took this order and backdated it 200 years, this country would be empty."

Congressman Beyer told DW that he intends to re-introduce his Religious Freedom Bill, which would prohibit blocking entry to the US on the grounds of religious identification. When Beyer first introduced the bill in May 2016, he gathered more than 70 Democrat co-sponsors, but only one Republican co-sponsor.

Several members of the Sudanese community from Maryland gathered with signs to protest one of their own being held up in Qatar. Ali, a 44-year-old immigrant from Khartoum, fell into a diabetic coma two weeks ago. His mother, Attfa, wanted to come from Qatar to visit but was stopped by the travel ban. 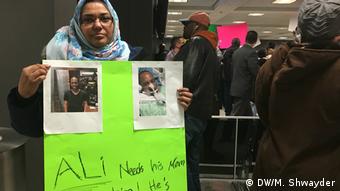 Ellebad's aunt, Attfa, was stopped in Qatar from traveling to the US to see her ailing son

"When he fell into the coma, she was so strong," Attfa's niece Lamia Ellebad told DW of her reaction. "And she just told us to talk and pray and ask God for help." But Attfa is in her 70's, friends said, and fainted and collapsed at the airport in Qatar where she was being held. Holding signs with pictures of Ali in his hospital bed, Ellebad asked why an old woman should be kept from seeing her only son.

What began as a handful of demonstrators in the terminal swelled over the hours to several hundred, and more volunteer lawyers arrived with signs written in English, Arabic and Persian, calling out to any families waiting for delayed members, or people who had been detained, to seek out an available lawyer.

Amid the frustration and confusion, many people pointed out moments of hope. Zaki Barzinji, 27, is the former liaison to the American Muslim community under President Barack Obama. Barzinji said he was not surprised by Trump's executive orders, given that he campaigned on these promises. "But it's horrifying," he said.

Barzinji then swiftly pointed out how many people had come together on a Sunday to protest the ban, and said this was a template for the way forward. "We're going to have to work together," he said. "These communities could turn inward, but were not strong on their own. But if Hispanics come out for Muslims and Muslims come out for Hispanics, then we can fight this."

The travel ban on citizens of seven majority-Muslim countries damages US security interests and further divides the country. DW's Michael Knigge writes that President Trump is playing a dangerous game. (29.01.2017)