Pros and cons of the Swiss referendum model | World | Breaking news and perspectives from around the globe | DW | 18.05.2014

Pros and cons of the Swiss referendum model

Switzerland's citizens went to the polls this weekend and voted on a proposed minimum wage and other issues. Is such direct involvement in political decisions a blessing or a curse for democracy? 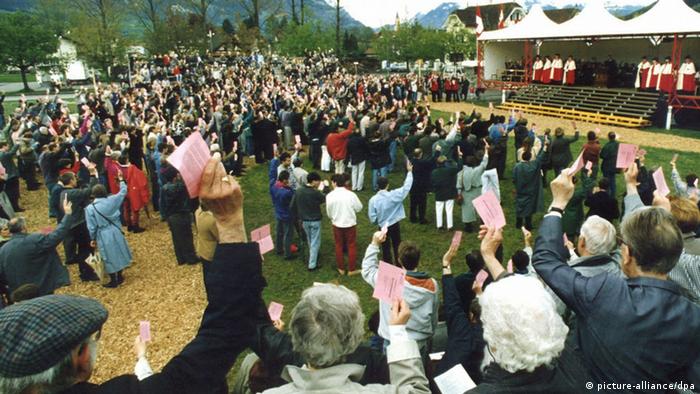 At least 22 francs per hour (18 euros, or $25) for each worker: This is the minimum wage proposal that the Swiss voted down on Sunday in a referendum.

In addition, they also had a say on whether the Swiss army should get new fighter jets - 53 percent said no - whether pedosexuals should be banned from working with children or which improvements should be made to the healthcare system. And then there were additional the local referendums in the individual cantons, Switzerland's provinces.

For some it may seem like referendum overdose, but for the Swiss it is the democratic system they are used to. They vote at least four times per year, giving their opinion on issues that in other countries are typically reserved for parliamentarians to decide on. When it comes to important laws, the people of Switzerland always have the last word - and if they gather enough signatures, they can themselves initiate changes to laws and the constitution.

The result, however, is not always the one politicians hope for - or one they would have predicted. As good as a 22-franc minimum hourly wage may sound, the majority of the Swiss were opposed to the idea ahead of the vote and made their voices heard during the referendum.

Estimates place more than half of all worldwide referendums as taking place in Switzerland. The small country of eight million residents is seen by many as an ideal model of democracy. However, recent years have shown that such referendums can lead to controversial political decisions. In 2009, a proposal to ban minarets on mosques received the majority of the referendum vote. And at the start of 2014, Europe was shocked at the referendum-based decision to restrict the number of EU immigrants to Switzerland. 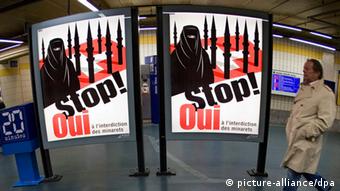 Swiss referendums have sparked controversy in the past

But for Hermann Heussner, professor of public law at the University of Osnabrück, these examples are not sound arguments against a system like Switzerland's. He advocates the idea of increasing the degree of direct democracy in Germany. Up to this point, there have been few opportunities to involve German citizens in decision-making, and doing so has been fraught with hurdles.

According to Heussner, public decisions as controversial as the ones in Switzerland would not happen in Germany. "Here we would first need to establish if a law is compatible with our constitution and with EU law," said Heussner. "And in the EU, we have the right to freedom of movement, so a ruling like the one in Switzerland would not be permitted."

Tobias Montag, a political scientist at the Konrad Adenauer Foundation, has a more skeptical approach. "I consider this to be a romanticized view," he said, adding that he does not believe referendums are generally helpful in alleviating a society's problems. "In practice, these direct democracy maneuvers often lead to great polarization, and that's not very helpful to democracy."

He pointed out that in societies without deep-rooted democracy, public referendums could have an adverse effect - especially in countries with authoritarian rulers. "They often use direct voting to make their politics look legitimate," said Montag. "It is a form of sham democracy."

Even in established democracies, said Montag, there is a danger that public referendums could be exploited by populists for spreading their opinions.

Questions of quality and credibility

Montag is also of the opinion that referendums can complicate and delay political decisions. Heussner does not agree, saying there is no evidence of such problems in Switzerland. 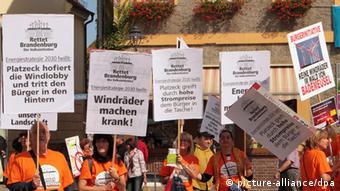 Public opinion can be a powerful force of change

"And the most important thing about decisions is not how fast they're made, but how good they are," Heussner added. "After all, laws don't only apply to today and tomorrow, but are meant to establish a foundation of order."

Heussner pointed out that in Germany some parliamentary decisions are made at turbo speed but are later deemed to be bad. This rarely happens in Switzerland.

At the same time, Heussner acknowledged that some referendums may not represent the voice of the whole population, since the better-educated members of society are more likely to take part. However, he added that although the average Swiss referendum only has a 50-percent voter turnout, the overall annual participation is around 80 percent, which is a lot higher than the typical voter turnout at a German election.

"This means, in relation to what is important to the typical citizen, Switzerland has higher political participation, including across the lower classes," said Heussner.

A solution for the EU?

He believes the EU could also benefit from general referendums, which would help it develop the image of being a joint project by EU citizens - and not an elite project. National borders would take a backseat to transnational interests on questions of, for example, whether water supplies should be privatized. "This creates a European public and a feeling of community," said Heussner.

However, most EU politicians have not shown much interest in involving the citizens in decision-making up to this point. This could be due to the fear of having EU-developed plans thwarted in one stroke.

So far, experience with public opinion has indeed been discouraging for EU politicians: Whenever the people have been asked for their view on a European project, the initial responses have mostly been "no."

Switzerland has voted overwhelmingly in favor of tightening the country's asylum law. The controversial decision comes with refugee applications having risen to their highest level in more than a decade. (09.06.2013)