German Chancellor Merkel has called on EU states to remain calm after a controversial Swiss referendum which limits the number of immigrants within its borders. The comments followed a meeting with the Swiss president. 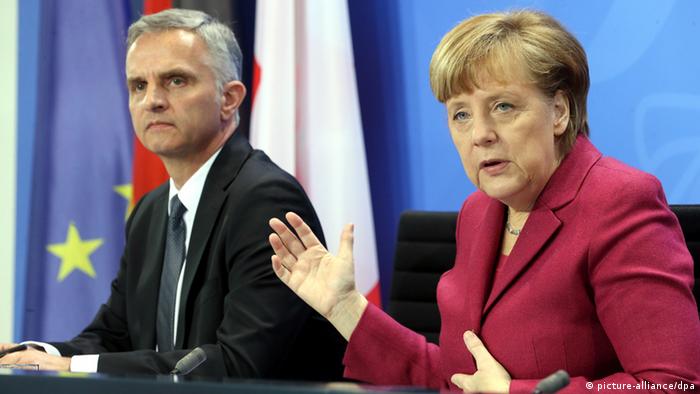 Speaking at a press conference on Tuesday afternoon in Berlin, German Chancellor Angela Merkel and Swiss President Didier Burkhalter spoke directly about recent controversy sparked by a referendum in Switzerland that will limit the number of immigrants.

EU members have reacted with concern to Switzerland's decision, a country which does not belong to the 28-member bloc, but who has an immigrant population of roughly 25 percent. Since the vote, Brussels has postponed talks on a cross-border electricity deal and, most recently, talks on a research and academic exchange program.

"It can't be that because one side did something in one specific area that the other side says nothing works in other areas," she said, referring to Brussels' retaliatory moves.

"The challenge will now be that we deal with the results in a way that relations between the European Union and Switzerland remain as intense as possible with respect for the referendum," Merkel added.

Merkel and Burkhalter also reaffirmed their commitment toward maintaining German-Swiss ties. The current bilateral trade volume is worth roughly 75 billion euros ($103 billion) and some 350,000 Germans are employed in Switzerland.

Decision 'not yet in force'

President Burkhalter also reminded reporters that the legally-binding referendum would not go into effect for three years.

"There is no reason to stop everything because of a decision that is not yet in force," Burkhalter said.

He also added that Bern would give special consideration to its relations with Croatia and ensure that the new legislation was implemented in a "non-discriminatory" way toward the newest EU member. The comment referred to a recent announcement by the Swiss justice ministry that it would have to scrap a deal which would have given Croatia free access to the Swiss labor market as a result of the referendum.

Earlier this month, roughly 55.8 percent of registered Swiss voters turned out to cast ballots in the referendum aimed at stopping "mass-immigration." The country's most powerful party, the nationalist-conservative Swiss People's Party (SVP) had proposed the measure, which did not garner support among Switzerland's other major parties. The referendum was passed with a margin of less than 20,000 votes and received the most support in rural areas.

Following the referendum last Sunday, European Commission President Jose Manuel Barroso warned that the restoration of quotas for EU migrants was in breach of an accord on free movement of workers that already existed. He warned the move would have "serious consequences" for relations between Switzerland and the bloc.

Swiss vote to stem immigration could cause 'a lot of problems'

Switzerland's neighbors and the EU say they regret the country's narrow vote to limit annual migration inflows. Veteran German politician Wolfgang Schäuble warns of "a lot of problems" for the Swiss government in Bern. (10.02.2014)