Projects from India, Bangladesh, Iran and Germany have won top honors at DW's annual contest The Bobs - Best of Online Activism. All of the projects aim to support oppressed people around the world. 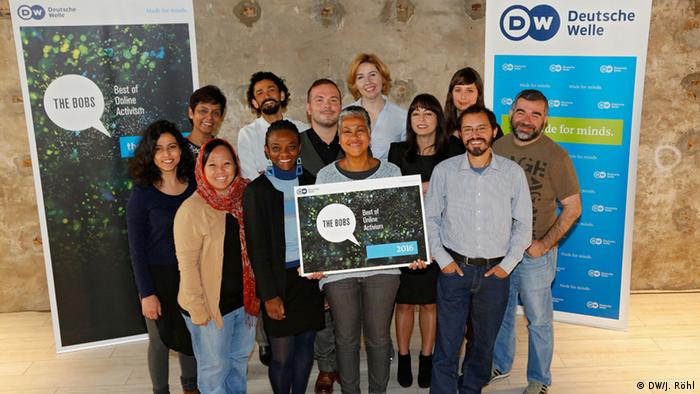 More than 2,300 projects in 14 languages from around the world were submitted to this year's competition. An international jury (pictured) announced the winners in the four main categories on Monday.

The winners of the 2016 The Bobs jury awards are:

The Indian project Stop Acid Attacks won the jury's award in the Social Change category. SAA focuses on supporting the women who survive acid attacks and too often find themselves alone and stigmatized because of the taboo surrounding the violence committed against them.

SAA helped establish the Sheroes Hangout, a cafe run by acid attack survivors and advocates for survivors' rights, for a law explicitly prohibiting acid attacks and for health care to be provided to survivors.

"They are actually making social change, and the fact is that Stop Acid Attacks has been able to make differences in laws," said Abhinandan Sekhri, The Bobs jury member for the Hindi language, referring to a ban on the official sale of acid in India.

"In places like India, where gender dynamics are generally warped and patriarchy is the order of the day, such a campaign takes one specific battle and, because they are winning, they inspire others as well," he added.

The Bengali documentary "Razor's Edge" won the jury's award in the Citizen Journalism category. The film examines the life-threatening situation secular bloggers and writers face in Bangladesh and the government's unwillingness to confront the spree of murders committed by religious extremists that has left four dead in the past five weeks.

"When in a country the government actually encourages the culture of impunity, then it becomes a responsibility of the citizen to stand up and demand justice, and that is exactly what this documentary has done," said Bengali jury member Rafida Bonya Ahmed, who survived a 2015 attack that resulted in the death of her husband, Avjit Roy.

"It has shown very skillfully how the government is encouraging this culture of impunity," she added. "It is a wonderful example of how to raise awareness about the situations so that we can actually protect the rights of a pretty big community in Bangladesh."

Strict regulations dictate what Iranians, particularly women, are permitted to wear in public, and religious police take to the streets to enforce the rules. The smartphone app Gershad relies on crowdsourcing to pinpoint the police and plot their location on a map so that people can avoid them and go about their daily lives.

"The app is important because it can help people, but it also highlights the repressive measures the Iranian government is using to harass people, and it just shows that Iranians don't have a choice," jury member Golnaz Esfandiari said, adding that millions of people have been harassed or detained by Iran's morality police.

One of the app's anonymous initiators said it "is the start of a dialogue about the religious police's arbitrary practices and about the need to strengthen civil rights in Iran."

The German project Center for Political Beauty won The Bobs jury award in the Arts and Culture category. The performance art collective organizes provocative events, including demonstrations to support refugees and protest the export of German weapons.

"For several years, the Center for Political Beauty has confronted a number of very different topics," German jury member Katharina Nocun said. "It's an appeal to broaden your horizons and to look at how global problems are connected."

In addition to the four jury awards, whose winners will be invited to an award ceremony at DW's Global Media Forum in June, internet users around the world participated in an online vote to select the the winners of the 2016 User Awards.

All the award winners can be found at www.thebobs.com.

Digital's influence on our lives at 10th Re:publica

The award honors a person or initiative taking a stand for human rights and freedom of expression. DW will be awarding the Freedom of Speech Award 2016 to Sedat Ergin, editor-in-chief of the Turkish daily "Hürriyet". (21.04.2016)