The award honors a person or initiative taking a stand for human rights and freedom of expression. DW will be awarding the Freedom of Speech Award 2016 to Sedat Ergin, editor-in-chief of the Turkish daily "Hürriyet". 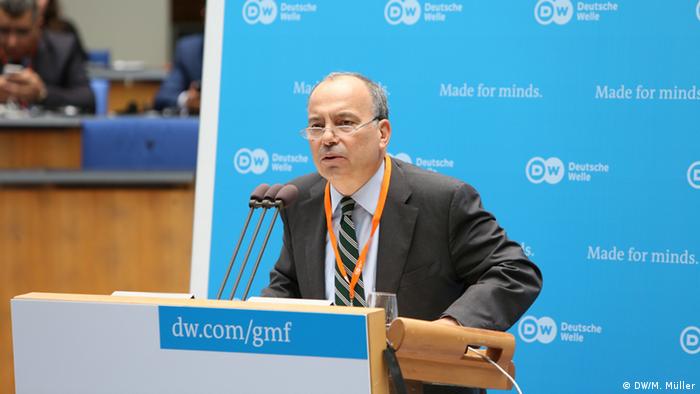 Sedat Ergin is on trial in Turkey for allegedly insulting president Erdogan. He shares the fate of several journalists in Turkey, who are facing the threat of prison sentences for practicing the right to report freely about events in their country. Hürriyet is the leading independent daily newspaper with the largest circulation. The paper's headquarters were attacked twice last year by pro-government mobs, instigated by supporters of the ruling party AKP.

When summoned to court in March, Ergin drew a sombre picture of press freedom in Turkey: "In the year 2016, courthouse corridorsand the hearing rooms have become the habitats of journalists in Turkey. Freedom of the press in Turkey in 2016 is now confined to court corridors."

Peter Limbourg, director general of DW, explains why the award is being given to the Turkish journalist: "We want to take a clear stand for the freedom of the press in Turkey. Sedat Ergin is a worthy honoree. He and his colleagues at Hürriyet are struggling to maintain their independent journalism and freedom of expression at considerable cost."

Sedat Ergin makes a point of saluting all colleagues under pressure and threats: "I am honored to be the recipient of this prestigious award upholding freedom of the press everywhere in the world."

"Deutsche Welle has established a radio service in the Turkish language in 1962 and since 1995 DW provides editorial content in Turkish on the internet. There is a strong friendship between Germany and the Turkish people”, says Limbourg, adding, “but we cannot look the other way and remain quiet when journalists, artists and scientists are being systematically intimidated and harassed by the Turkish authorities."

The winner of the Freedom of Speech Award will be honored during an award ceremony at the Deutsche Welle Global Media Forum in June 2016 in Bonn. Last year, the award was given to Saudi blogger Raif Badawi.

For the 12th time, Deutsche Welle is honoring exceptional online activists and projects from around the world. An international jury, whose members are prominent online activists and digital media experts, will be awarding "The Bobs" in four categories, this year choosing from 2300 entries in 14 languages:

Social Change: projects that use a range of digital advances to have a positive influence on the world

Tech for Good: technical innovations and websites dealing with topics such as data protection and online security

Citizen Journalism: projects and websites taking advantage of all forms of online participation