The project is unique. For over a year, South Asian and German poets have been working together, creating 280 translations - and a new understanding for the themes and traditions of South Asia. 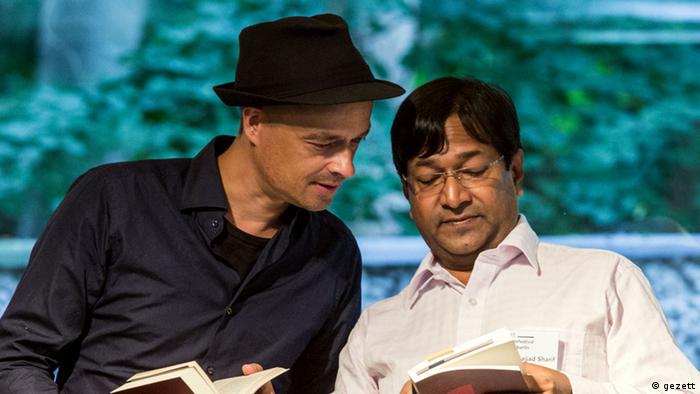 "It was splendid for me," says Indian poet Rajendra Bhandari. "We usually lose so many things by translating poems. But this time, we gained much more. We got to know the language, the culture."

Bhandari was among the participants of a project established in 2002 by a Berlin-based center for poetry called Literaturwerkstatt. The project "Poets Translating Poets," or PTP, aims to bring poets of foreign cultural regions into contact with German poets.

With the help of linguistic mediators, they translate poems from one language into another, like from German into French, Russian and Hebrew, and vice versa. The results of these efforts fill 13 volumes published over the years by the publishing house Wunderhorn Verlag. 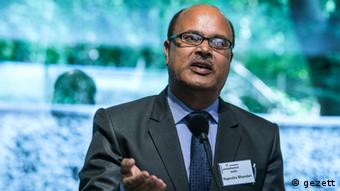 "Poets Translating Poems South Asia" is a unique translation project, involving 51 lyricists working in 20 languages. Seventeen German-speaking poets encountered colleagues from India, Bangladesh, Pakistan and Sri Lanka. The participants of this project have demonstrated that it is actually possible to translate poetry.

The project was initiated by philosopher and director of the Goethe Institute in Mumbai, India, Martin Wälde. He got the project going in cooperation with the Berlin-based Literaturwerkstatt and UNESCO. The translated poems were presented for the first time during the Berlin Poetry Festival.

"Given that there are hardly any translators adapting from these languages into German, and even less literary translators, it's absolutely amazing that this all worked out," says Thomas Wohlfahrt, director of the Literaturwerkstatt.

"That was one of the hurdles that needed to be tackled in this project, so that interlinear translations could be produced that formed the basis of the work of the authors." The poets attended nine workshops held at different locations across the Indian sub-continent, in order to translate their texts.

How did the cooperation work out? For example, poet Sajjad Sharif from Bangladesh met his counterpart Hendrik Jackson in Dhaka. They had three days for three poems in their respective language - and they were short.

And yet, this was a great challenge. Sharif noticed one major difference: "In Bangladesh, we know German culture way better than the other way around. Many German poets have been translated in Bengali, from Rilke to Enzensberger. But there are very few translations of Bengali poems into German," he says. He nevertheless feels they were successful in the end: "Hendrik slipped into my language and I slipped into his. It was fantastic." 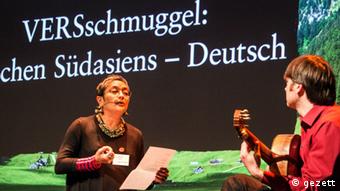 The multi-lingual project not only has a significant artistic dimension, but also a political one: The project celebrates numerous oral and written literary traditions in languages whose very existence is practically unknown in Germany.

According to Mamta Sagar, the nationalist Hindu government of India is putting a lot of pressure on artists with the aim of creating a largely homogeneous Hindu culture. That's why the author from South India decided to publish poetry only in her own language, Kannada. "The whole nation is expected to be a Hindu nation, to be transformed into a Hindu nation. Actually, our country is a multicultural country. It's a secular nation. Mainstream politicians are trying change this. My poems depict different political incidents," she explains.

As a professor and a screenwriter, Sagar also uses her language as a tool to formulate different themes, such as feminism, in new ways: "As a woman, I am always put in a lower position. So I have been trying in my poetry to experiment with meaning. I bring music into it. I perform. My poems demonstrate that there is a space where a beautiful life beyond religions or casts is possible. To me, poetry is more than art." 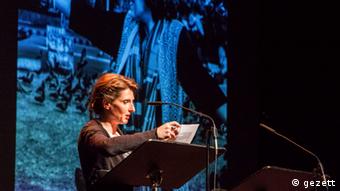 'We should do this much more often'

Author Daniela Danz translated poems of Pakistani poet Amar Sindhu who, due to visa problems, did not make it on time to the festival. "I stayed in Karachi for only five days, but that stay gave me a better understanding of the culture than anything else," Danz says. "The women poets are mostly feminist writers. They are committed to feminism. One needs to study a lot if one wants to understand the historical context of the poems."

Danz was so impressed by her experience that she would like to share it with others: "I wish more people could have this experience, at school for instance. Getting the feel of poems from other cultures would be a great thing for young people."

"Poetry starts whenever a person starts using the word beyond the meaning of the dictionary. Then a new language is born," explains Sajjad Sharif, who, as the chief editor of the most important Bengali newspaper, pays close attention to meaning of words.

Through this poetic exchange, he and 50 other poets have created a new language, and new originals.

The poets will present the results of their cultural exchange during a reading tour to 12 German cities through October 30, 2016, to be followed by a three-day festival in Mumbai, as well as other events in Chennai and Srinagar in November.

The poems are collected in two volumes, titled "Versschmuggel mit Südasien," edited by Martin Wälde and published by Draupadi-Verlag.

How art and culture can foster dialogue and change politics

An over 200-year-old German translation of Shakespeare's works made him seem more German than he was. Later, the Nazis insisted that version be kept, says Shakespeare expert Hans-Jörg Modlmayr. (22.04.2016)

Ashraf Fayadh was arrested for apostasy in Saudi Arabia last year and has subsequently been sentenced to death. Now, writers in more than 120 countries are taking part in an initative to support the artist and poet. (13.01.2016)