Latvians are going to the polls in parliamentary elections that could see a strong showing from a Russia-friendly party. In 2018 the country celebrates a hundred years since it first became an independent state. 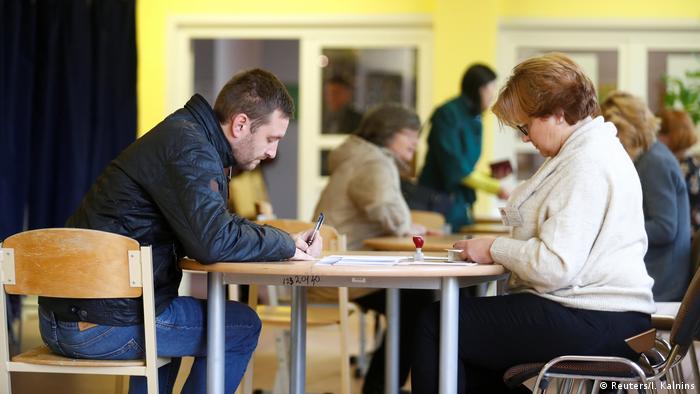 Latvians were voting Saturday in a general election that could see a pro-Kremlin-populist coalition come to power, as the Baltic state celebrates the centenary of its independence from the Tsarist Russian empire after the World War I.

With a quarter of voters remaining undecided on the eve of the election, according to independent polling firm SKDS, the result is still wide open.

But the center-left and pro-Moscow Harmony party enjoys strong support among Latvia's ethnic Russian minority, which makes up about a quarter of the country's 1.9 million population.

Harmony, which was formerly allied with the United Russia party of Russian President Vladimir Putin, is expected to put in another good showing after winning the majority of votes in the last three elections. It did not enter government solely because it failed to find any other party to form a coalition.

This time around, however, it could find the necessary ally in the KPV LV, a populist party led by former stage actor Artuss Kaimins, who has retained popularity with voters despite his being detained over corruption allegations in June.

The KPV LV — which translates as "Who owns the state? — has suggested it is willing to work with any other parties, saying it had "no red lines."

Polls show that a relatively new rightist party, the New Conservative Party, which opposes Russian being considered a national language in Latvia, is also likely to enter parliament. The Russian language dominated during Latvia's periods under Soviet rule from 1940-41 and 1944-1991. The current national language is Latvian but there have been attempts by Russian speakers to re-establish their tongue at an official level alongside it.

Latvia, an EU and NATO member, is currently ruled by a center-right coalition of the Unity party, the Union of Greens and Farmers and the National Alliance, but opinion polls have shown it losing ground.

Saturday's election in Latvia, which sees 16 parties vying for 100 parliamentary seats, is being monitored by a team from the Organization for Security and Cooperation in Europe (OSCE). Polling stations are to close at 1900 UTC and final results are expected early on Sunday.