European editorial writers are keeping an eye on the gas dispute between Russia and Ukraine, which has been likened to an energy policy earthquake, the effects of which are being felt across Europe. 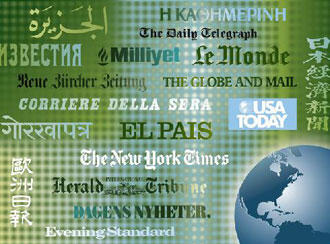 Rome's La Repubblica called the dispute a "threat to the entire region." "The gas dispute has already moved beyond the borders of Russia and Ukraine," the paper wrote, adding that it will spread to wealthy western European countries and then to poorer nations as well. The paper doesn't regard Moscow's promise to guarantee gas delivery to the EU as stable, writing: "Moscow caved in to the pressure from the European Union, but warned that it won't be able to continue covering for theft by the Ukrainians."

The Independent, from London, asked why Ukraine has been singled out by Russia for a price hike in natural gas when other former Soviet states also pay less than the going market rates. The paper concluded that it was a political decision. "Vladimir Putin intends to destabilize Russia's western neighbor in the hope of unseating its leader, Viktor Yushchenko," the Independent wrote. "The Ukrainian president has been a thorn in the Kremlin's side since he was swept to power amid mass demonstrations against Russian influence. With elections looming in Ukraine, President Putin regards this as the right time to exert pressure." The paper said that the crisis has made it clear that Europe is urgently in need of a common energy policy.

Magyar Nemzet, from Budapest, urged Hungarian politicians in charge of energy issues to no longer keep their heads stuck in the sand, as Hungary is more dependent on energy imports than its neighbors. "Hungary is to 80 percent dependent on imports, and natural gas makes up more than 40 percent of the energy sector," the paper wrote. "It is very regrettable that it is only now, in such a critical situation, that we are weighing the options of having coal and nuclear energy play a bigger part in meeting our energy needs -- albeit after the use of more environmentally friendly renewable energy sources."

Liberation, from Paris, commented that Ukraine is now staring the capitalist revolution in the face. "Russia is demanding market prices for its gas, otherwise it will turn off the tap," the paper wrote. "With that, Russia is using a tried and true strategy of international capitalism -- how can this be thrown in Russia's face?"

Paris' Le Monde labeled the dispute the "first declaration of war in the 21st century." "One country cuts off the energy supply of another because it doesn't give into its demands," the paper wrote. "Russia, the largest natural gas producer in the world, pushed the button on the gas weapon. With the emergence of consumer giants such as China and India, raw materials have become the economic weapons of deterrence, if not mass destruction."

"Of course it's hardly sensible or fitting that Ukraine or other countries of the former Soviet Union build their economies on the back of extremely cheap Russian energy imports," wrote Berlingske Tidende from Copenhagen. "But as an energy superpower, Russia has a responsibility to raise prices gradually over a number of years, so that it doesn't force its clients into a crisis situation. The current demonstration of power over the Ukraine is insupportable, because it so baldly demonstrates the iron fist of the Kremlin when it comes to foreign policy."

DW-WORLD summarizes the main issues of the gas dispute.